If only trolls would decide they didn’t have time … I know I don’t have the time for them.
GIF found on tenor.

There are a few commenters on the newspaper’s website I’ve stopped responding to, in no small part because they seem to take perverse pleasure in spreading falsehoods. Those falsehoods sometimes involve history, though, so I feel compelled in those instances to correct the record. I’m a bigger word nerd, but I’m nerdy for history too, thanks to some truly wonderful history teachers and professors.

Such was the case a couple of weeks ago with my column about independents in politics. This paragraph was the cause of the commenter’s consternation:

“I can only roll my eyes at the shunning of Mitt Romney for not falling in line with orthodoxy and the apoplexy over Nancy Pelosi’s ripping up her copy of the State of the Union address (calm down, folks, she is not mandated to preserve a copy of the speech). The same goes for the anger over the president not shaking Pelosi’s hand and the gloom-and-doom forecast after the president’s acquittal (and no, it doesn’t mean his impeachment is erased; like Clinton’s, the stain remains).”

Which provoked this, complete with ridiculous capitalizations:

“However, UN-like Clinton’s, Trump was ACQUITTED. Bill Clinton was found GUILTY and thus was censured and fined $$$$$$$$$$$. Of course, I never would expect partisan Brenda Looper to acknowledge that FACT in a column where she proclaims how NON-partisan she is.”

Since that isn’t true, I felt the need to respond just in case anyone not aware of historical reality happened upon the comment and somehow believed it to be fact (or FACT, as he shouted). As I told the commenter, “You can disagree with me all you want, but reality is another matter.” (And dude, great job on not getting the point about the column being that more people don’t claim party allegiance than do.) 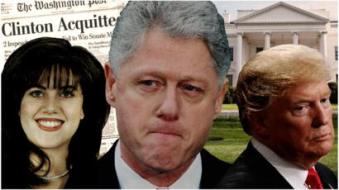 Ooh, look at that headline … or maybe this is like the whole Obama thing with time travelers going back to 1961 Hawaii to put his birth announcement in the papers. It’s all on Doctor Who.
Image found on BBC.

Just like Donald Trump, Bill Clinton was impeached by the House and acquitted in the Senate (and a Republican Senate at that, so not exactly friendly territory). Clinton was not censured; only one president has been, and that was Andrew Jackson back in 1834. In 2001, Clinton was fined $25,000 by the Arkansas Supreme Court in a case related to the Paula Jones lawsuit (which was settled for $850,000), and his law license was suspended for five years (technically he could now practice in Arkansas again if he wanted to … but why would he want to?). He faced disbarment by the U.S. Supreme Court, but opted instead to resign from practicing in that court.

The historical facts are out there for the asking, but you’ll find alternative versions as well, just as you will for the Civil War, the Holocaust, and other bits of history that are inconvenient for one reason or another. Heck, you can also find information on things that didn’t happen, like the Bowling Green Massacre or the Baggage-claim Battle at Washington National. Those last two we can at least laugh about. 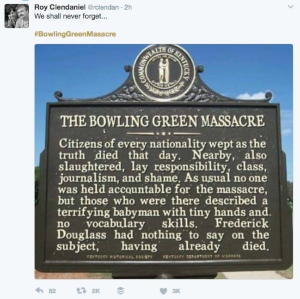 Who says the event has to be real to have a historical marker? Oh, right, historians. Pbbbt. Big nerds.
Image found on Empire BooBoo Kitty. 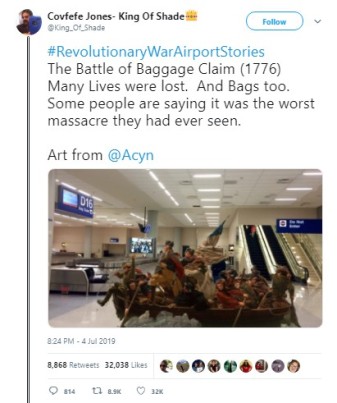 It was a horrible scene. Baggage-handlers were set upon with great fury.
Screenshot from Covfefe Jones, King of Shade’s Twitter page.

History can be revised when new information comes to light, and that’s a fully legitimate academic process in which the historical record is re-examined in light of the new data. Where it goes too far is when it’s distorted, usually for reasons, such as political animus, having nothing to do with the evidence. That would be not historical revisionism, but historical negationism, or denialism.

The Soviets were masters of this, going so far as to edit people out of films, books and photos if they shamed the party. Former Iranian President Mahmoud Ahmadinejad set off a furor in 2007 because of a speech at Columbia University in which he said the Holocaust didn’t happen. As far as the nation of Turkey is concerned, the Armenian genocide was a figment of the imagination.

And please don’t make me quote the bit from 1984 about the memory hole, where inconvenient and embarrassing records went so it appeared historical events didn’t happen. I much prefer George Orwell’s essays to his fiction, though, like Orwell, I’m no fan of totalitarianism. Coincidentally, in his “Why I Write” essay, he includes among motivations for writers: “Historical impulse. Desire to see things as they are, to find out true facts and store them up for the use of posterity.” 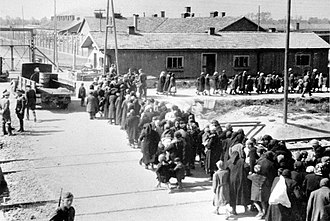 These people aren’t in line to see a movie; they’re in line for the gas chamber at Auschwitz. We need to remember the Holocaust so it doesn’t happen again.
Image found on Wikimedia Commons.

History isn’t pretty, and we should not pretend that any person, country or party is all good or all bad. We expect the record to change with the discovery of new information, verified with academic rigor. What we don’t want or need is for history, even that which we’ve lived through, to be completely rewritten to serve someone’s ego.

Debate the events and revise the record if the evidence supports it, yes. Deny, distort or completely reimagine events … nah. History deserves better than that.

Denialism doesn’t just happen in history. But whatever field it’s happening in, there’s legitimate debate and then there’s the refusal to accept real evidence in front of your eyes. That can have disastrous, sometimes fatal, consequences. 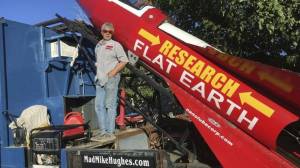 Supposedly he wasn’t as much a Flat-Earther as some are saying, but I doubt he’d do this stuff if he didn’t believe pretty strongly.
Image found on SlashGear.

Like for Mike Hughes, a proponent of the “Flat Earth” theory. Over the past several years, he worked to blast himself off using homemade rockets with the goal of proving that Earth is flat. He successfully launched in March 2018, though he crashed, luckily escaping with just a sore back. A video on Hughes’ Facebook page was quoted in a LiveScience story about that event: “Do I believe the Earth is shaped like a Frisbee? I believe it is. Do I know for sure? No. That’s why I want to go up in space.”

His luck didn’t hold out this weekend, and he died in a crash.

If he wanted to know about Earth or space, perhaps he should have talked to people who study it for a living. Just a thought.