Life has a way of reminding us that we’re not the center of the universe, nor are our petty problems. Just when it seems politics and standoffs, manufactured and otherwise, have taken control, something like Sunday happens.

Anyone who’s lived in Arkansas more than a couple of minutes has come up against at least one tornado (though likely many more than that). Many of us have lost loved ones, homes and businesses; some have been seriously injured.

At times like this, I always think of the April 1980 tornado cluster that hit large areas of where I grew up in rural western Arkansas, especially hurting Witcherville, a few miles from my home. I remember sitting in the church basement (because we had no storm shelter) for what seemed like days until all the twisters had passed.

But even more, I remember what happened afterward.

People who had escaped serious damage showed up in droves wherever in that area someone was in need, bringing food, water, clothes and other necessities, as well as lending a hand or hammer to help those who’d suffered recover a little faster. My parents, brothers and I were part of that, and we spent the better part of the weekend handing out sandwiches, hugs and help cleaning up to our friends, family, neighbors and strangers.

No one had to ask for help; it was just there because that’s what neighbors do for each other. 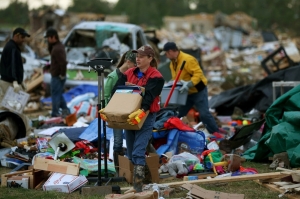 Volunteer Gina Lowe helps a family move belongings from a home that was destroyed by a tornado two days before in Vilonia. Mark Wilson/Getty Images.

It was heartening, then, to see how many ordinary people have been showing up to help with cleanup in Mayflower, still reeling from the Pegasus pipeline spill last year, and Vilonia, which was just coming back from a devastating tornado almost three years to the day before Sunday’s storm.

A twisted power distribution line tower is crumpled on the ground near Mayflower after a tornado struck the town late Sunday.  Image by Danny Johnston/AP.

The scale of the damage by the half-mile-wide tornado—which cut a 40-mile path through the state—is almost unimaginable, in part because those two towns had already suffered through so much.

Vilonia’s new intermediate school that was to open in the fall was destroyed, as were many homes and businesses, some having been rebuilt after the 2011 tornado. A resident who spoke to the Weather Channel described the scene as being “like a war zone.”

School Superintendent Frank Mitchell, surveying the remnants of the $14 million school,  said “There’s just really nothing there anymore. We’re probably going to have to start all over again.”

At least 60 homes were estimated to be at least heavily damaged in Mayflower, and a medical triage had to be set up in a home-improvement store parking lot to take care of the injured.

Coincidentally for me, Mayflower was also struck by the 1980 twisters that devastated part of western Arkansas. 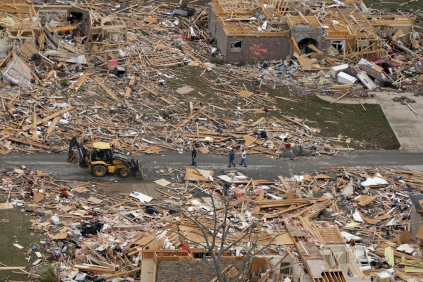 Along Interstate 40 north of Little Rock, stuck semis, trucks and cars were tossed and shredded, creating massive backups; astoundingly, no one died there.

In Arkansas as of Tuesday afternoon, though, 15 were confirmed dead: at least 11 people in Faulkner County (most of them in Vilonia), along with three in Pulaski County and one in White County. The storm system also spawned tornadoes Sunday in Missouri, Kansas, Nebraska, Iowa and Oklahoma, killing at least two more people. On Monday, more tornadoes hit Mississippi, Tennessee and Alabama, killing at least 14 people. 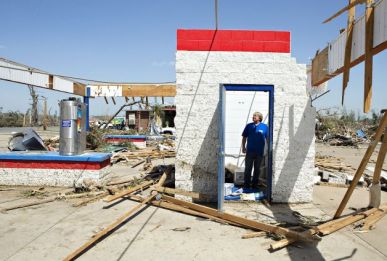 Ken Sullivan, general manager of Wet Willies Super Auto Wash, looks over the damage after a tornado tore through the area for the second time in three years in Vilonia.
Photo: Wesley Hitt, Getty Images

There, of course, have been instances of people using the tornado to make political hay, and those who attack every move, such as touring disaster sites and comforting victims, made by some politicians as grandstanding for photo ops. Such partisan politicizing tends to get ugly quickly.

Ken Brown hands out IDs Monday at Beryl Baptist Church to volunteers after a tornado Sunday tore through the Vilonia area for the second time in three years. Wesley Hitt, Getty Images.

However, in a wonderful show of humanity, the state has come together and manpower, food, water and other items have been donated.

Pleas have gone out for chain saws, generators and other tools, some of which have been provided for free by local businesses.

Dropoff locations for donations have been set up for those who can’t get out to the areas in need.

Sawed logs today. And I don't mean sleeping! Playing with chainsaws and helping people is a good combo. #PrayForArkansas #ArkansaStrong

Jack, a dog displaced by the tornado in Mayflower, awaits a reunion with his people. Photo courtesy: Maumelle Friends of the Animals via Facebook.

On social media, the hashtags #PrayforArkansas and #ArkansasStrong have been trending on Twitter, and meteorologists, reporters, government officials and ordinary people have been spreading the word about the needs of those affected and the latest updates on damage, and even pleading for help to get lost photos back to families who’ve lost everything else. Others are connecting to ensure that pets separated from their homes are reunited with their families, and celebrating moments such as the discovery of a family’s black cat, scared but safe, under the remains of their house in Vilonia.

People across the country and around the world have sent well wishes and contributions to help the cause. Lou Myers, of Westminster in Great Britain, emailed a letter to the newspaper, and though I couldn’t print it in our letters section since he’s not an Arkansas resident, this very kind man’s words and sentiments deserve to be shared:

On the wall of my apartment in London is a plaque and a certificate, denoting that (although I am an Englishman) I am an “Honorary Arkansan.” This has always been one of highlights of my life, one to which I have always felt so proud of. I have, over the years, made many visits to Arkansas, and met so many, many wonderful, delightful people. Yes, even a certain president of America.
Yesterday, whilst reading the London Times newspaper, I found a large article, with pictures, of the absolute devastation in your state. I am, now in my later years, quite used to reading about the wars and banditry and the sorry state in parts of Europe and the Middle East, but sir, they do not have the same impact on me when reading about a part of the United States that I have come to love as more or less my own.
Would you therefore, through your paper, pass on my deepest respects and sympathy to the people of Mayflower; please let them know that although 8,000 miles away, that we are aware of their losses, and wish them our very warm feelings and respects.

A tweet from Dylan Teague of Russellville summed it up better than I ever could:

It's discouraging to see the widespread devastation in my state, yet reassuring to see people rise up to help one another. #ArkansasStrong

I’ve always believed that when people come together to help others with no thought to themselves, that good deed spawns others and makes the world that much better. Sure, there are those studies that say doing good deeds reduces stress, but even more than that, this is our state; these are our neighbors, our family, our friends.

Want to know how to help? The Red Cross and Salvation Army are accepting donations, as are several area churches and other organizations. Follow the links in this paragraph to get where you need to go.

We’re Arkansans, and we can do this.