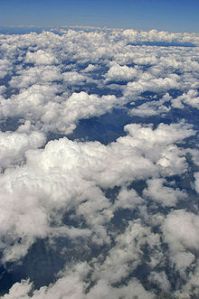 Does it amuse anyone else that this cloud’s name is cumulus mediocris? Just seems fitting when discussing politics … Photo credit: Wikipedia.

One of the weird things about working at a newspaper is that unless you’re working in features or on the wire desk, there’s a lot of entertainment/media “news” that you miss. Working in the opinion section (for two years now), you miss even more.

So it was that I learned of Cumulus Media dropping Rush Limbaugh and Sean Hannity … via my 71-year-old mom.

Let us have a moment of si– OK, that’s more than long enough.

Politico reported Sunday on Cumulus’ plans to drop the syndicated radio shows of both “personalities” when their contracts lapse at year’s end.

Awwww, and I’m such a fan … oh, no, wait, I’m a fan of facts, something those two have only a passing acquaintance with … on Wednesdays … when it’s raining … in Death Valley …

It’s been floated that Mike Huckabee might be moved to fill one of the slots. Gee, really?

He’s so beloved by those of us who remember such golden comments as “banana republic” (in reference to Arkansas … while he was its governor) or that he was not descended from primates (I always knew he wasn’t human). Sure, the guy who’s been using God as a political tool, the one who had a huge hand in the releases of Wayne Dumond and Maurice Clemmons, both of whom killed multiple people in other states after they were freed (though he’ll tell you it was Jim Guy Tucker and/or the parole board who was responsible for Dumond, and that he wasn’t psychic and was just going by what was in Clemmons’ file) … yeah, that’s the guy who’s beloved. Which is why he won the presidential race … oh … he didn’t? He flamed out?

Can you tell I’m not a fan of the kind of people who in one breath say “Keep the government’s hands off my life,” then clamor for more government when it comes to enforcing their personal idea of morality, Constitution be damned?

OK, so you made it through that, so enjoy a little tune from our boy Bill … can’t help it, it cracked me up!