Nope this has nothing to do with the Rolling Stones, but instead a subject very close to my heart: Rescued animals.

My, Luke, what human feet you have! Oh, those are your grandma’s? Never mind.

As you may remember, my boy Luke was a rescue, and has brought so much joy to my life. Many of my friends also have rescues, some from shelters, and that’s what today, National Adopt a Shelter Pet Day, is about.

Adopting any pet is good for the pet and you, but for those from shelters, it may just mean saving their lives. The ASPCA estimates that 6.5 million pets enter shelters each year; about 1.5 million are euthanized, and 3.2 million are adopted.

Though Luke wasn’t a shelter pet, he might well have been had I not fallen in love with him when he was brought to me. Nearly 14 years later,  I can’t remember my life without him. I think everyone needs that kind of love (and goofiness) in their lives. Don’t you want to call your local shelter for some fuzzy love?

Oh, wait … I guess that explains why you can’t lick your nether regions …
Image found on Pinterest.

Let me out, copper!
Image found on BarkPost.

That face is his secret weapon.
Image found on Pinterest. 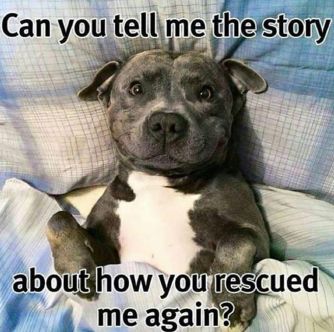 Yes, sweetie, but 76 times is the limit for one night.
Image found on Pinterest. 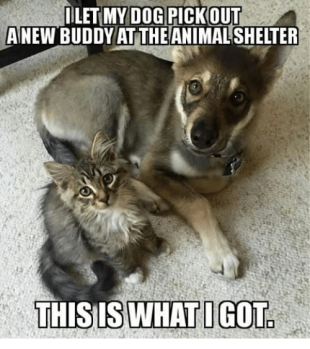 Good thing for me Luke doesn’t like other animals; otherwise I’d be well on my way to 47 cats.
Image found on BuzzFeed.