I had no intention of watching the debate Monday night (if just because many of the “facts” used on both sides would most likely be at least somewhat fact-free)—on my schedule for the night, besides finishing this column, was intense thumb-twiddling (also known as, “Seriously? Why is this Windows update taking two hours?”) and cat-cuddling. Yep, I really know how to live.

Besides, I already knew what was going to happen; T-Rump would get defensive and nonsensical, and Hillary would be competent and uninspiring. It’s not like it’s hard to guess.

Anyway, with politics off the table, this week I turn my attention to another source of frustration and amusement.

Spelling and pronunciation mistakes can sometimes make even the mildest-mannered word nerd into a raging grammar grouch. Say “new-kew-ler,” “real-a-tor,” or “joo-la-ree” around me and at least one recent letter-writer and you’ll likely hear a low growl … if you’re lucky. Of course, right now it would be punctuated with coughs, but that’s beside the point.

I feel an overwhelming urge to smack them …
Zippy by Bill Griffith.

If it helps, break up those particular words into separate words. Repeat after me: New-clear. Real-tor. Jewel-ree. Got it? Good.

My cousin Mary, who just happens to have been my (and my brothers’) senior English teacher in high school, often greeted mispronunciations in her class with “Make sure you don’t put the em-PHAS-is on the wrong sy-LAB-ble.” But what about when the actual syllables and letters are ignored?

Don’t get me started on Britons and their habit of ignoring whole syllables. In ’Murica, “Leicester Square” would probably be pronounced LYE-ches-ter Square instead of the Britons’ Less-ter Square.

It all makes me want to tell people my name is Brenda, spelled Hasenpfeffer.

Phonetic spellings (oddly, “phonetic” isn’t spelled phonetically) can help sometimes, but more times than not, the ones I see tend to result more in guffaws than comprehension. While checking an online discussion on a British newspaper site last week, I came across “passafists.” It took several minutes before I realized that the writer meant “pacifists,” and then I couldn’t stop giggling at the imagery. (Somebody else obviously has my weird sense of humor, judging by the fictional fistfight card game someone dreamed up … called Pass-a-Fist.)

I have no idea anymore what the article was or the point the writer was trying to make.

In Arkansas, make sure you call it El Do-RAY-do (or El Da-RAY-da). They’ll leave you alone … probably.
Image by Billy Hathorn found on Wikipedia.

Then there are the place names whose pronunciations vary from place to place—such as El Dorado (long A in Arkansas, and with an “ah” in California), Cairo (pretty much like the syrup in Illinois, and with a long I in Egypt) and Lafayette (essentially the original French in Louisiana, but with a long A in Arkansas … we apparently really like using a long A). And there are the ones that look as if they should be pronounced one way but will quickly tag you as an outsider if you pronounce them as they’re spelled. Just try to pronounce Gravette as gra-VETTE in Arkansas and see what happens.

According to Grammarly, the English language “has 44 distinct sounds, with more than 1,000 different ways to spell them! But think of the advantages. English spelling gives fascinating glimpses into the origins of words that retain the pronunciation of their language of origin. … The English language’s odd pronunciation habits add an element of unpredictability, making it an interesting language that keeps learners on their toes.”

Why, yes, it is!
Image found on TVTropes.

Is it any wonder we’re confused? And pity the poor non-native speakers learning English, especially those whose first language is more phonetic (meaning that what a word looks like is pretty much how it’s pronounced, and vice versa) and has more consistent phonemes (distinct sounds) than English. Add to that the English language’s tendency to appropriate bits of other languages, and it would seem mispronunciation is inevitable.

Some mispronunciations are artifacts of childhood and misreading words we haven’t yet heard, such as “hyperbole” (hyper-bowl) and “determined” (deeter-mined; I remember this one), and never correcting the mispronunciation. When I first saw “Ouachita” in print, I thought it was ooh-a-cheetah. Yeah, I’m a laugh riot at the zoo.

We easily excuse mispronunciations from kids, probably because we’re so busy chuckling at the errors. (April Ham Lincon? Comedy gold, people!) From adults, though, those mispronunciations tend to grate, and we often label the offenders as uneducated or just plain annoying and doing it intentionally to get under our skin. 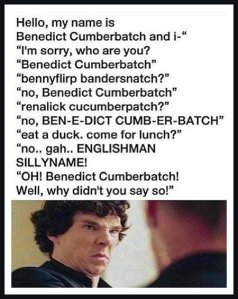 To be honest, this would be mostly intentional if it were me … just too much material. 😉
Image found on Pinterest.

Sometimes, though, it may be a result of dyslexia or central auditory processing disorder (essentially verbal dyslexia, and something I suffer from)—when your eyes or ears get their signals crossed, it’s hard at times to know what the correct pronunciation is.

So can anything solve our mispronunciation problem? Not much I see, really, other than continuing education.

But, I hear you say, it’s rude to correct people. Sure, it is—in public, and especially if it’s a stranger; however, there’s nothing stopping a private chat if it’s someone you know, and that person can decide to listen—or not.

Now if they listen and continue intentionally mispronouncing words, I’d advise patience … lots and lots of patience … and maybe some chocolate.

Come to think of it, I’d advise that with the election, too.

OK, so I didn’t watch the debate, but I’ve seen a lot of funny stuff about it (other than that excellent Bennett cartoon at the beginning of this post). A few of my favorites … 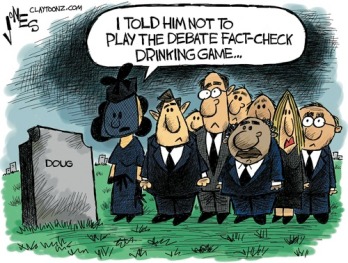 It’s obviously a conspiracy. It gave him the sniffles, too.
Image found on AboutPolitics.

I wrote Law & Order. The only role Donald Trump could have in Law & Order is as a rich bastard suspected of killing his wife.

.@realDonaldTrump just wanted you to know that you are being beaten by a girl.

I see Hillary has come dressed in the blood of men who have underestimated her.

Trump: I'D LIKE TO PHONE A FRIEND (h/t @kbrad5) #debatenight

The only winner tonight is the Voyager probe, which is speeding away from the Earth at 17 kilometers/second #debatenight