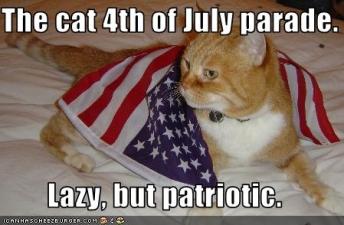 What? You wanted me to go outside? It’s hot out there!
Image found on Gleamings from the Golden Dawn.

It seems appropriate on this first day of July to reflect on patriotism. After all, Saturday is July 4, celebrated as the founding of our country.

Patriotism unfortunately has become a political football of late, with some people maintaining that one can only be patriotic if he supports a certain party’s stance on just about everything. Except that’s not true.

Leave it to the Word Nerd to pull out the dictionary for this one.

Merriam-Webster defines patriotism as “love for or devotion to one’s country.” The Oxford English Dictionary says a patriot is “a person who vigorously supports their country and is prepared to defend it against enemies or detractors.” In none of the two dozen online dictionaries I checked did I find that it meant devotion to a party or leader. 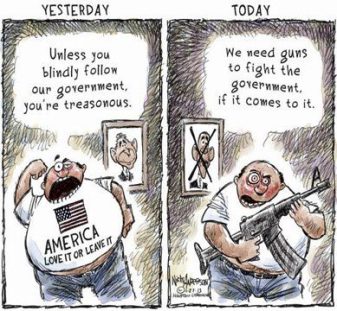 OK, what counts as patriotism today? I didn’t get the memo. I first published this cartoon on the blog in 2015, and we’re back to yesterday.
Editorial cartoon by Nick Anderson, Houston Chronicle.

Our first president, George Washington, had warned of the dangers of partisanship in his farewell address, saying, “It serves always to distract the public councils and enfeeble the public administration. It agitates the community with ill-founded jealousies and false alarms, kindles the animosity of one part against another, foments occasionally riot and insurrection. It opens the door to foreign influence and corruption, which finds a facilitated access to the government itself through the channels of party passions.”

If Washington were alive now and saw the mess we find ourselves in, I can imagine he would be screaming, “I told you so!”

In a May 1918 essay, “Lincoln and Free Speech,” in Metropolitan Magazine, former President Teddy Roosevelt made clear the line between politics and patriotism: “Patriotism means to stand by the country. It does not mean to stand by the president or any other public official save exactly to the degree in which he himself stands by the country. It is patriotic to support him in so far as he efficiently serves the country. It is unpatriotic not to oppose him to the exact extent that by inefficiency or otherwise he fails in his duty to stand by the country. In either event it is unpatriotic not to tell the truth—whether about the president or about anyone else—save in the rare cases where this would make known to the enemy information of military value which would otherwise be unknown to him.”

That same month, Roosevelt published an opinion piece in the Kansas City Star, stating, “To announce that there must be no criticism of the president, or that we are to stand by the president, right or wrong, is not only unpatriotic and servile, but is morally treasonable to the American public. Nothing but the truth should be spoken about him or anyone else. But it is even more important to tell the truth, pleasant or unpleasant, about him than about anyone else.” 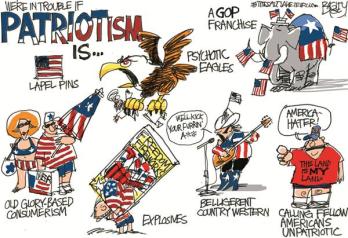 But in today’s America, telling the truth (you know, reality, as opposed to what someone wants you to believe despite evidence) will get you accused of being unpatriotic. (And yes, we know that Roosevelt wasn’t the best of men according to today’s standards, but he did a lot of good too, and he was quite wise.) You can also be accused of being unpatriotic if you kneel during the national anthem, but considering that kneeling is a sign of reverence and submission, as well as indicating mourning, that seems overblown. Turning your back on the flag or not saluting at all seems far more disrespectful (or, say, pretending to conduct an orchestra while the anthem plays).

One political party has no more claim to patriotism than any other. With more people identifying as independent than liberal or conservative (in the last Gallup poll on party affiliation May 28-June 4, 40 percent identified as independent, 25 percent as Republican and 31 percent as Democrat), it would be logically unwise to say that one of those groups is patriotic while the other two aren’t. Yet that’s just what’s been happening.

Because, again, we can’t have nice things. And apparently patriotism now means supporting questionable behavior as long as it’s by someone of your party. 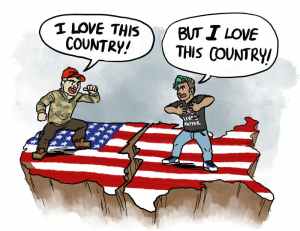 Stop fighting, y’all! It’s not a competition.
Image found on The Daily Cardinal.

Just because someone is center-­left doesn’t make them any less patriotic than someone who’s on the right, and vice versa; actions and attitude toward the country determine that. Questioning the nation’s actions doesn’t make one less patriotic either, as no less than Abraham Lincoln confirmed in his second inaugural address, referring to God’s punishment in the Civil War “until every drop of blood drawn with the lash shall be paid by another drawn with the sword.”

As Adam Kirsch wrote in The Wall Street Journal in October, this was in its deepest sense an expression of patriotism: “In accepting punishment, Lincoln affirmed that America should be judged by its own highest principles. After all, it is only those principles that make the country what he said it was in a message to Congress in advance of the Emancipation Proclamation—‘the last best hope of earth.’”

As far as I’m concerned, getting rid of political parties would go a long way toward that goal.

As an introvert, I’m also fine with forgoing all parties of any kind. But that’s just me.

I can’t let this topic go without mentioning Merriam-Webster’s blog entry discussing the difference between patriotism and nationalism (primarily, nationalism is more exclusionary). The dictionary couldn’t offer firm guidance on whether nationalism is an insult across the board, but noted that patriotism doesn’t have the same baggage. You know, like Nazis and white supremacy. 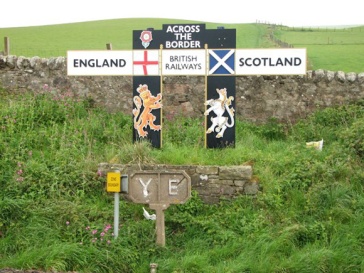 Scotland voted to remain in the EU. I think they were right.
Image found on Prospect Magazine.

And there’s also that “quomodocunquizing clusterfist” reference.  The first known written appearance of “patriotism” came in Thomas Urquhart’s Ekskybalauron  in 1652:

“There hath been in London, and repairing to it, for these many yeers together, a knot of Scotish bankers, collybists, or coinecoursers, of traffickers in Merchandise to and againe, and of men of other professions, who … hug all unto themselves; that, for no respect of vertue, honor, kinred,  patriotism, or whatever else…whereof those quomodocunquizing clusterfists and rapacious varlets have given of late such cannibal-like proofs, by their inhumanity and obdurate carriage towards some (whose shoos-strings they are not worthy to unty) that were it not that a more able pen then mine, will assuredly not faile to jerk them on all sides … .”

“(Quick side note: the Urquhart citation above serves two purposes, being both our earliest written evidence of the word patriotism and a fine excuse for drawing the reader’s attention to the beautifully splenetic turn of phrase ‘quomodocunquizing clusterfists.’ These two words are archaic enough to only be defined in the Oxford English Dictionary, which informs us that the former is ‘that makes money in any possible way,’ and the latter is ‘a close-fisted or grasping fellow.’ Should you ever find yourself in need of an insult that is not hackneyed and stale we wholeheartedly recommend quomodocunquizing clusterfist. End of side note.)”

Just imagine the confused looks on people’s faces when you call them this (once you figure out how to pronounce “quomodocunquizing”). The Word Nerd finds fun where she can. 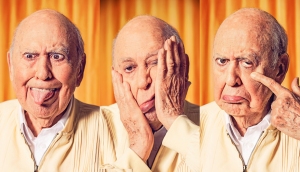 Carl obviously had been watching my expressions as I edit. Rest in peace.
Image found on AARP.

As I was double-checking this column Tuesday morning (specifically the “quomodocunquizing clusterfist” … I can’t help it!!!), I happened upon the unfortunate news that Carl Reiner died, at age 98 (most unfortunately before he could cast a vote in the November election). He (and frequent partner and best friend Mel Brooks) was a favorite of mine, and he was still working into last year (it appears his last film role was that of the voice of Carl Reineroceros in Toy Story 4). In addition to siring Rob Reiner (another very funny man), he could always make me laugh, often without even speaking. He was a real mensch, and just made me feel warm and happy. I’ll miss him.

Can someone please make sure Mel Brooks is OK? Thank you!