“The closer an apple is to rot, the more rot it spreads—one spoiling apple, in a crisper drawer or a fruit bowl, or a storage barrel or a cross-country shipping container, or even still hanging on the bough, speeds the rot of every apple it touches, and even of ones it doesn’t touch.”—Helen Rosner, The New Yorker, June 8, 2020

After a bad experience last week, I was calling a now-former friend a “bad apple” (and other things, many not publishable in a family newspaper).

Can’t argue with that, really.
Image found on Facebook.

He/she/it (who knows, as a pseudonym was used, supposedly because of the person’s job) was revealed to be a fake after sending a message to me and mutual friends announcing a departure from Facebook and the game that had brought us together as friends. The deception made me weigh the advantages and disadvantages of staying with Facebook, which I had joined partly to keep in touch with that person. I ultimately decided to stay because my other friends showed me that he was not typical of the rest of them.

No harm was done except to my pride, really, and I was reminded to be wary of strangers, even those I think I somewhat know after more than a year of conversation.

The day it happened, I checked my home email late in the day and saw that one of the links from the Merriam-Webster Word of the Day included a history of the “one bad apple” metaphor. And oops, by considering my case in isolation, I was a bit mistaken.

Yep, the Word Nerd gets things wrong, perhaps much more than you might think (yeah, for those people who think I know all … HA!).

My former friend may look like this, for all I know.
Image found on Medium.

According to Merriam-Webster’s Words at Play blog, “A bad apple is generally understood to refer to someone who creates problems for other people, and whose actions or behaviors negatively influence the larger group. The phrase is often interpreted erroneously by implying that a bad apple is not representative of the whole, when in fact the term stems from the larger phrase ‘one bad apple can spoil the barrel,’ which suggests that the negativity is not an isolated incident.”

“Some commentators,” says Words at Play, “pointed out that O’Brien seemed to get his metaphor backwards. His intention, by labeling racist police officers bad apples, was to say that such officers are not representative of police departments as a whole, and that an individual’s corrupt behavior can be isolated from the system in which that individual operates. But the proverb to which O’Brien alluded actually suggests the opposite: ‘One bad apple spoils the whole barrel’.” 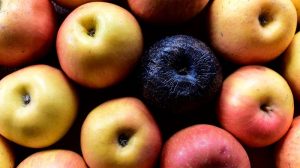 You couldn’t pay me to eat that apple.
Image found on The Ladders.

We could blame The Osmonds (that’d be the brothers, not Marie) for a little of the confusion over the metaphor (as well as horrible fashion sense, as seen in the above video), says the blog: “In 1970, The Osmonds recorded their hit ‘One Bad Apple,’ with its catchy refrain phrased in the negative (and improper subject-verb agreement to boot): ‘One bad apple don’t spoil the whole bunch, girl.’”

Merriam-Webster would have piped up, had social media been around then, and said, “Uh, no, it kinda does.” I can just imagine what it would have tweeted about the slang of the 1970s.

The blog quoted from Helen Rosner’s New Yorker article on how apples decay: “Blight spreads quickly, and it’s not always apparent on the fruit’s surface. Even without the influence of invader or infection, an apple abets its own spoilage: its skin, minutely porous, exhales ethylene, a gaseous compound that induces ripening, and the fruit has no interest in stopping at the point where it serves our needs.” 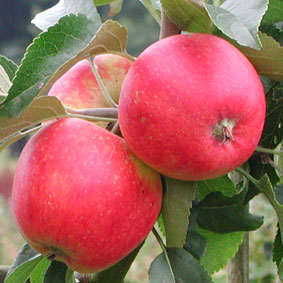 The Pink Lady is the best eating apple, as far as I’m concerned.
Image found on Ison’s Nursery & Vineyard.

Which means that if you don’t remove that bad apple soonest, all you’ll likely have left are bad apples. And if they’re Pink Lady apples (my favorite; perfect balance of tart, sweet and crisp), that would just be a waste, because they’re delicious.

“Bad apples” has been used to refer to police misconduct, those American soldiers involved in torturing prisoners at Abu Ghraib, and other less-than-sterling behaviors as a way to say that, hey, sure, what that guy did was reprehensible, but he’s an isolated case. The science of rotting apples, though, reminds us that misbehavior doesn’t happen in a vacuum, and that the actions of one can have an impact on those of others.

Get rid of the damaged/diseased fruit before it infects everything around it.
Image found on Collecting the Moments.

For example, those on the fringes of political parties generally don’t speak for the rest of the party, but given time and the right atmosphere (ahem, now), that party can become completely unrecognizable as anything but the fringe. Like with culling apples to prevent disease, it’s best to cut out the fringes if you have any hope of saving the party and what it represents.

Not that I’m a fan of political parties, but this has become ridiculous. Even partisans from 20 years ago probably wouldn’t recognize what their parties have become. Heck, 10 years ago wouldn’t be much of a stretch.

The bad apple on my friends list is gone now, and I’m much happier. Some friends still post way too much political rhetoric for my taste, but I know them (in real life, I mean), and they’re good people. They’re why I stayed.

I’ve calmed down since last week and have placed things in the proper perspective, and not just with bad apples in general.

While the way I got to Facebook ended up to be based on someone’s apparent idea of a joke, I found that I have more people who care about me than I thought possible (and they’re not all nuts … some are, and they know who they are). Seeing and talking to people from back home who helped shape who I am and making new friends has brought me out of my shell a little bit (though it’s still pretty comfy; I won’t be an extrovert any time soon).

Even better, these are people willing to use their real names, and that means something today. It’s one of the reasons we don’t publish anonymous letters to the editor on the Voices page of the Arkansas Democrat-Gazette: If you have something to say that you feel strongly about, you should be willing to use your real name. If you think the only way to make your point is to hide behind a pseudonym, you risk being labeled a bad apple.

And you know what we do with bad apples.

Rotten apples aren’t good for anything but compost and tossing at people who disappoint you. But don’t do that; just compost them.
Image found on Public Domain Pictures.

Another benefit I found to Facebook over the past week: Monday night I got to watch John Lewis: Good Trouble as part of a free online screening (Amazon is streaming it, but you have to pay for it). Watching it on the day that his casket arrived at the U.S. Capitol to lay in state (the first Black lawmaker to get that privilege) was deeply moving.

It was a reminder, I think, for all of us that change needn’t be accomplished through violent means. Though he was beaten and could have died on the Edmund Pettus Bridge all those years ago, he never lost his good humor or his desire to fight for rights for all in peaceful ways.