Pretty much how I feel right now …

Note to readers: I’m taking a little time off to try to breathe without coughing up a lung (it seems I need my lungs), so rather than make you read the weirdness that comes from little sleep and mistyping, I looked through my old columns. The original version of this one ran Feb. 26, 2014. Hopefully next week I’ll be back to my usual wisecracking self.

What outlandish tales can I launch today?
Image from ComicVine.

Sad to say, we’ve become a society where truth doesn’t have the value it once did. Now anyone with an Internet connection and an ax to grind or prank to pull can post just about anything and know that someone out there will believe it, no matter how outlandish it may be.

A real cat, really Photoshopped. Image from Museum of Hoaxes.

An 87-pound housecat named Snowball? Sure, that’s what Photoshop was made for. Pay no attention to the man who admits doctoring a photo of a 21-pound cat as a joke for friends.

The Obama administration giving up the chance to spend oodles of cash after being petitioned to build the Death Star? Yep, as White House science and technology adviser Paul Shawcross told Star Wars fans, “This isn’t the petition response you’re looking for,” and at an estimated cost of $850 quadrillion, it was far too expensive. Besides, Shawcross said, the administration doesn’t support blowing up planets, and the Death Star’s flawed design is too easily foiled by a one-man starship.

Newt Gingrich is J.K. Rowling and wrote the Harry Potter series? OK, seriously, if it’s in The Onion, doubt it. Please.

We live in a world full of people who doubt climate change; Barack Obama’s … well, everything; and the moon landing, despite any proof given. So why do so many supposedly skeptical people believe and pass along easily debunked stories?

Psychologists point to confirmation bias, in which someone places higher value on information that meshes with his beliefs while undervaluing or discarding what doesn’t jibe.

Says The Skeptic’s Dictionary: “If our beliefs are firmly established on solid evidence and valid confirmatory experiments, the tendency to give more attention and weight to data that fit with our beliefs should not lead us astray as a rule. Of course, if we become blinded to evidence truly refuting a favored hypothesis, we have crossed the line from reasonableness to closed-mindedness.”

Skepticism is needed in a world where scammers are not only using the old Nigerian story or hacking to separate people from their hard-earned cash, but also expanding into crowd-funding. We should be wary of the sources of our information rather than simply trusting implicitly what we’re told, yet must be careful not to cross the sometimes-thin line separating skeptics from paranoid conspiracy theorists.

As the National Review’s Jonah Goldberg noted in response to emails about massive, evil government conspiracies:

Sure, there are true conspiracies out there, but few are as well-planned and executed as the bulk of the current supposed political cabals are reputed to be by the Tinfoil Hat Brigade. 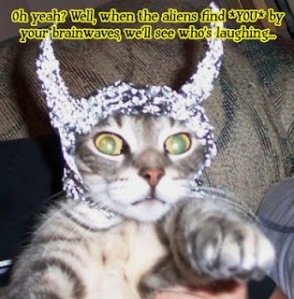 So why am I again talking about finding the truth? No, not because I’ve been watching that State Farm commercial again (that “Uhhh … bawnjer” gets me every time). It’s because Voices still gets email forwards and letters based on faulty facts and debunked myths.

Whether it’s a too-good-to-be-true checklist reputedly penned by Saul Alinsky (no proof has been found that he wrote it) on building a social state, or a list of votes by a member of Congress that’s not quite accurate, there are many falsehoods whose spread could have been cut short if one person early on had just checked the claims out before forwarding.

Luckily, there are several sites that uncover the truth (some even do a periodic roundup of viral stories proven to be false), and sites like HoaxBusters.org maintain an index of stories. As for congressional votes, places like Thomas Voting (Library of Congress), govtrack.us and OpenCongress.org record votes and bill texts, and are reliable sources of what actually happened in Congress (which is scary enough without embellishment).

A healthy dose of skepticism is a necessity to keep what little might remain of your sanity and occasionally be able to laugh. Checking the facts you’re given is the first step.

And for those who somehow believe I’m part of this vast liberal conspiracy that terrifies you for some reason, relax. In my columns, you’re much more likely to find a bit of cynicism laced with a weird sense of humor than subtext outlining my outrageously liberal plot to rule the world. Yeah, if I can’t get my 18-pound cat to quit “accidentally” turning off my laptop whenever he notices me looking at cat pictures that aren’t him, the odds of me taking over the world aren’t that great. Besides, the cat is much more likely to take over the world … but after his nap.