It’s been said that politics make strange bedfellows; I say political ads toss the mattress out the window. (You didn’t need to sleep, did you?)

In election seasons, the Voices page is often inundated with letters about this candidate or that, and unfortunately, quite a few of those letters end up in the scrap heap, usually because the writer either basically parroted a campaign ad or because he took what was said as gospel truth without checking it out. Just because it’s pithy doesn’t mean it’s true.

I’ve touched on this a little previously, but some letters received over the past week dictate a return of the topic.

One of the reasons I’m not a huge fan of politics in general (especially as practiced today) is that each side makes broad statements that, absent context, can seem correct, but are often misleading, weaselly and/or disingenuous.

Well, they can make those statements, but the other side can’t. 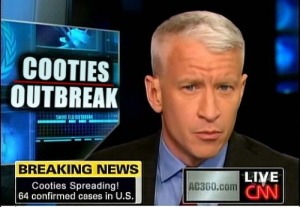 I feel like I’m back on the playground. I suddenly feel the need for a cootie shot.

The alternative to not allowing one side while allowing the other to continue to make such broad statements is to not allow them to anyone. Considering we’re in the middle of a battle royale at the moment, that unfortunately ain’t happenin’.

We necessarily have to give a bit more leeway to broad statements during election season—as long as what’s said is true in the broader sense (though often lacking relevant context) and isn’t an outright lie.

To demonstrate, some recent examples: 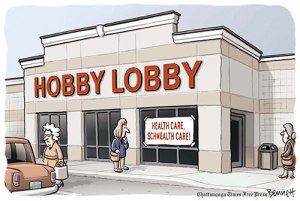 As usual, Clay Bennett says it better than I can.
Image from Truthdig.

You can say: Hobby Lobby denies birth-control coverage to its female employees.

You can’t say: Hobby Lobby denies coverage of any birth control to its female employees.

Of the 20 FDA-approved forms on the list associated with the Affordable Care Act, Hobby Lobby denies coverage of four methods it believes to be abortifacients. Because those four methods are denied, the first statement is acceptable (misleading, yes, but acceptable). Since it allows the other 16 methods, you cannot say it denies any or all birth control. 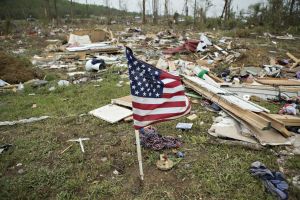 A flag flies amid the debris after the Vilonia tornado. Image by Wesley Hitt, Getty Images.

You can say: Tom Cotton voted against disaster relief.

Cotton indeed voted against disaster-relief bills or amendments five times, four of those votes related to Hurricane Sandy relief, as the GovTrack voting-record database shows. None of those votes, however, were related directly to Arkansas.

You can say: Tom Cotton enlisted after 9/11.

You can’t say: Tom Cotton enlisted immediately after 9/11, giving up a lucrative career.

This one always brings to mind the “yada yada” episode of Seinfeld, where George’s girlfriend “yada-yada’d” sex.

It wasn’t quite so quick for young Tom. Rebecca Berg of the Washington Examiner wrote in August 2013:

In his stump speeches, Cotton says he was inspired to enlist in the Army after the Sept. 11, 2001 attacks, although he rarely mentions that he first finished law school, worked in private practice and paid off his school loans before he finally enlisted, four years after the attacks.

Just not right after. 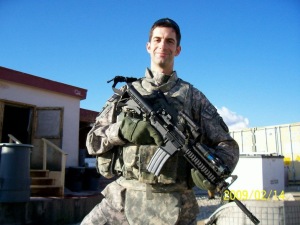 Thank you for your service, Mr. Cotton, but don’t let people continue to think you enlisted immediately after 9/11, please.
Image found on pbs.org.

This one really bugs me, starting with the ads that ran when he was running for Congress two very short years ago that talked about his enlistment and that reappeared this year in the Senate campaign, to interviews he’s given where the intervening years just sorta disappeared. You can’t yada-yada years!

Moral of the story? Take claims in political ads (all of them, trust me) with an entire salt mine, and check them out for yourself before placing your trust in a candidate who relies on a lack of context to make political points. Sure, that may mean you have no one to vote for, but …

Made to be printed?

Yo, Brenda! I’m not one of those who inundate your office with repeated, unsolicited diatribes, so this issue is not paramount in my life, but I take umbrage at your reference to those who violate your rules that allow for only one letter per writer in a 30-day period.

You write, “Sigh. That policy box on the bottom of the page isn’t there just to fill space.” Suggest you read the policy box again, as I just did four times to be certain. No reference to a 30-day limit.

Scott Stubenrauch notes that there’s no rule in the policy box stating that letter-writers get only one letter per 30 days, and he’s right; it’s not there. As far as I can tell, it’s never been there (but I could be wrong); I know it wasn’t there when I put through a revision of the box last year for clarity’s sake, and that was the first revision in years. 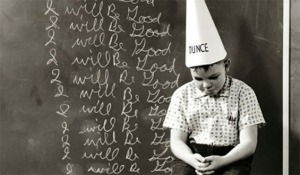 Some rules are OK to break or bend, but others give other people a chance to have their say too.
Image found at educationnews.org.

However, because we want to conserve space for the letter-writers, we necessarily leave out some well-established rules, such as the 30-day rule; that policy box would be much larger if we added in every rule. Besides, I and others at the paper have written about that particular rule enough that it should not be an issue.

When I read last week’s column on the proof, I did add a few words to make it more clear that I meant the rules in the box as well as the well-known ones not there, but I probably should have just rewritten that section. This is why everyone needs an editor.

I’m just sorry the “gotcha” wasn’t of the more exciting variety. I’ll try to make any future mistakes more embarrassing for me.

At least Scott was fairly nice about it; some aren’t.

It’s never been news to me that I wouldn’t be able to please everyone with my work on the Voices page. All I can do is try to fill the page with as broad a range of letters and columns as I can in the hopes that more than family, friends and people I knew growing up will read the page.

I know there are people out there who won’t be happy regardless of what I do; they know I can’t walk on water, but they’d sure like to see me try (and hey, I can’t swim; bonus!).

Tell ya what: I’ll bring the life vest, and you bring the popcorn. 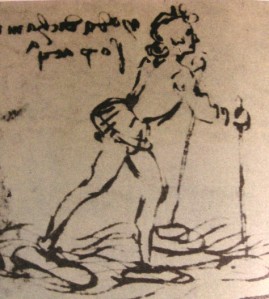 *Readers of my column in the print edition of the paper may notice the title for this blog entry isn’t the same as the column (which it usually is). I figured I wouldn’t be able to get away with “Pith and vinegar” in the  paper. 😉