Some people you just can’t help hate-reading. Dr. Seuss isn’t one of them … he rocks.
GIF found on Grammarly.

When someone’s writing drives you up the wall, what do you do? Do you read it anyway, cringing all the while, or do you decide it’s just not worth your time and find something better to do?

In a world full of confirmation bias, we’re “blessed” (using that term loosely) with an awful lot of people who—perhaps to prove a point that they aren’t limiting their news exposure—read the writing of people they hate just so they can complain about it. Probably every writer at the Democrat-Gazette has at least one hate-reader out there, and some have many. (Ah, John Brummett, Philip Martin and Brad Gitz … I’m so jealous!) 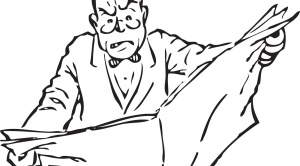 If he’s not mad about something he hate-read, he’s angry that the pages are curling.
Image found on weclipart.

I could tell you something similar to what one of my college radio-TV instructors told a caller upset about something the station he worked at was broadcasting, which was that the caller could always switch the channel or turn off the TV. But we in the newspaper business need eyeballs so, please, read on.

You should realize, though, that you’re probably not getting what you should from whatever it is you hate-read. It might be a compelling analysis of the current political climate, or biting satire on climate change, but because you’re heading into it with a seething hate on, it will just fly over your head. Careful it doesn’t treat you like pigeons treat statues. Especially Confederate ones. 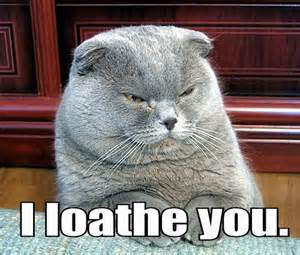 Who are you again?
Image found on digopaul.com.

But my point here isn’t to pooh-pooh and tsk-tsk your (and my) hate-reading. It’s to shine a little light on just why we willingly subject ourselves to things we can’t stand, whether it’s hate-listening (do you really think everyone who listens to Taylor Swift loves her music?), hate-watching (ditto pundits like Bill Maher or Sean Hannity) or hate-reading.

Back in 1826, William Hazlitt’s essay/short story “On the Pleasure of Hating” explored some of the reasons we carry around hate:

“We cannot bear a state of indifference and ennui: The mind seems to abhor a vacuum as much as ever nature was supposed to do. Even when the spirit of the age (that is, the progress of intellectual refinement, warring with our natural infirmities) no longer allows us to carry our vindictive and headstrong humors into effect, we try to revive them in description, and keep up the old bugbears, the phantoms of our terror and our hate, in imagination. … The pleasure of hating, like a poisonous mineral, eats into the heart of religion, and turns it to rankling spleen and bigotry; it makes patriotism an excuse for carrying fire, pestilence, and famine into other lands: It leaves to virtue nothing but the spirit of censoriousness, and a narrow, jealous, inquisitorial watchfulness over the actions and motives of others.” 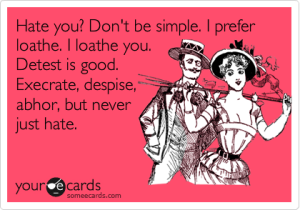 Hate can be so multifaceted!
Image found on someecards.

So yeah, for some people, hating is just kind of a fun part of life. It’s the strange joy that comes from feeling superior to someone else because that other person is in your estimation less intelligent, less talented, more inane or whatever else makes you feel better.

A former colleague still occasionally emails when a columnist he loves to hate writes something that irritates him (which, to be fair to my former colleague, is very easy; he’s not the only one who criticizes this particular writer). Though no longer in the state, he still feels a compulsion to inflict those columns on himself. I have the same problem with the president’s Twitter feed—sure, some of the responses are hilarious (sometimes unintentionally), but they’re also unhealthy to dwell on overmuch, which is why I now try to limit my exposure (sometimes, though, the siren’s call is too strong).

It’s all about not feeling so insignificant, but you have to be pretty small to belittle others.
Image found on The Legal Watercooler.

Alexander Jordan, one of the authors of a Stanford study on shared misery, told the New York Times in 2013: “It’s when a person’s typically rosy self-view is temporarily threatened that self-enhancement processes, such as finding people to ‘hate’ online, are triggered. Research has also shown that people who are chronically unhappy or low in self-esteem are more concerned about social comparisons, upward or downward, in general.”

What??? Someone with an inferiority complex might insult or otherwise demean others to make themselves look better? Gosh, that sounds absolutely nothing like anyone in politics right now …

It comforts us when we look down on others we deem dumb, ugly or fake. Of course, that’s not what we tell ourselves. We say it’s just for fun or to check up on old acquaintances when we’re hoping that their lives are just as miserable as ours; if we’re not happy, others shouldn’t be either. And if they indeed aren’t happy, we can feel we have the upper hand in life.

But I’ve said it with cute animals, so we’re cool, right?
GIF found on giphy.

There’s not much to be done to fight the need to feel superior to others, other than to just go cold turkey. But how realistic is that nowadays, with the Internet, television and every other form of media making it possible for us to stay connected pretty much 24/7, sometimes to those we despise?

A cabin in the woods is starting to look really good right now.

As long as I still have access to cat videos, anyway.