I’m the letters page editor for the Arkansas Democrat-Gazette. I’ve battled IBS and severe depression for a long time, and I recently had a stroke, but my family, my cat and duck butts help me keep everything in perspective … and chocolate … lots and lots of chocolate …

My regular posts are on Sunday (always something that makes me happy) and Wednesday (my column, which covers lots of topics, including grammar, research and politics). I also occasionally post additional entries irregularly as the spirit moves me.

Most of the time, this will be funny/weird stuff, which, along with puzzles, music, photography and making jewelry, helps calm me down, cuz, ya know, I internalize, and that’s not good. For anybody. 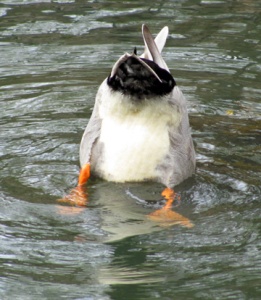 I see your duck butt and raise you …