Words evolve. I know this. I accept it. But sometimes a word jumps up and down on my last nerve, and right now that word is “woke.”

Any of these would be enough for me to smack you.
Image found on Boston Globe.

I should clarify here that there are basically two flavors of grammarians—descriptivists and prescriptivists—and I am mostly a descriptivist.

Irish writer and editor Stan Carey, on his Sentence First blog, describes the two: “Prescriptivism and descriptivism are contrasting approaches to grammar and usage, particularly to how they are taught. Both are concerned with the state of a language—descriptivism with how it’s used, prescriptivism with how it should be used. Descriptivists describe, systematically recording and analysing the endlessly changing ways people speak and write. … Prescriptivists prescribe and sometimes proscribe, emphasising rules and guidelines based on the conservation of customs (and sometimes a mythical ideal of correctness), and on judging what is or isn’t acceptable—which poses, among other questions: acceptable to whom, when, and why?”

“Woke,” the simple past tense of “wake,” existed as just that in the nationwide consciousness until about 1962, according to Oxford Dictionaries, when it took on the meaning of “well-informed” or “aware” in the headline of a New York Times article (“If you’re woke, you dig it”), written by African American novelist William Melvin Kelley, that discussed white beatniks appropriating black slang.

Things never really change, do they? 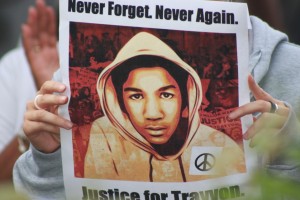 “Woke” appeared every so often in the years following, along the way picking up political and racial-justice connotations, such as in the 1972 play Garvey Lives, and in 2008 got a boost from Erykah Badu and her song, “Master Teacher.” But after the killing of Trayvon Martin in 2012, the word truly took on new life in the Black Lives Matter movement.

Since then, though, it’s been appropriated as teenage slang on the Internet and, as Nicole Holliday, an assistant professor of linguistics at Pomona College, wrote in a 2016 guest post on the Oxford Dictionaries blog, “it has been stripped of its gravitas as well as its call for black folks and allies to remain aware of oppression.”

“Like its lighter predecessors from 2015, ‘on fleek’ and ‘squad goals’,” Holliday wrote, “woke has now lost some of its original meaning and ties to black communities. Woke featured prominently on [MTV] News’ list of words to use in 2016, and they define it simply as ‘being aware—specifically in reference to current events and cultural issues.’ In MTV’s conceptualization, woke simply means being aware, without any connections to black oppression or consciousness that it had when it re-entered wider usage in 2013. In this way, woke has been racially sanitized for a mainstream audience. Woke has been removed from its ties to black communities as well as its reference to black consciousness and political movements. As a result, woke itself can no longer perform the function of promoting and indexing black consciousness and liberation.” 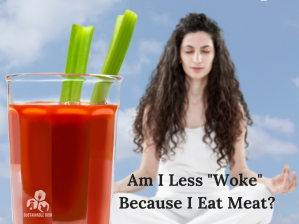 Can you be less woke than not woke at all?
Image found on Sustainable Dish.

Zeba Blay wrote in 2015 on Huffington Post about appropriated slang: “From ‘the bomb’ to ‘holla’ to the very short-lived ‘YOLO,’ black slang words often go through the cycle of being used by black people, discovered by white people, and then effectively ‘killed’ due to overuse and a general lack of understanding of how to use these words.”

Kids, especially, tend to run with those words in texts and social media, murdering them by degrees. And once those kids’ parents try to use them to seem cool to their kids, those words are officially dead. Soccer moms shouldn’t say “YOLO.” Their kids are mortified enough already.

How “woke” hasn’t yet ended up on Lake Superior State University’s list of words to banish is a mystery to me. I’m trying right now to imagine Chuck Schumer or William F. Buckley using it in the way intended, and … nope, can’t contain the laughter.

When used correctly and sincerely, “woke” is fine, as are several other slang terms. Fighting for racial justice and equality? You’re likely legitimately woke. Buying fair trade coffee and recycling? Sigh … do I really have to spell that one out?

Overuse and misuse can kill any word (I have a list to suggest!). It just may take a while and a lot of frayed nerves.

I was prompted to this topic because I read “woke” multiple times on page proofs last week, but also because a friend sent me a book about how language, specifically English, evolves. (Thanks, Bruce!)

I have yet to really dive into Words on the Move by John McWhorter, but I’m looking forward to it, especially based on his words in the introduction:

I could watch this parade all day long.
GIF found on homdor.com.

“We do not watch a parade and wonder why those people don’t just stand still. Language is a parade: the word whose sound and meaning stays the same over centuries is the exception rather than the rule. If that kind of change is precisely why we speak Modern English rather than the language of Chaucer and don’t mind a bit, then today’s changes ought to inspire curiosity rather than perplexity: ‘Where’s the language going next?’ rather than ‘What’s that all about?’”

Ooh, and Ms. Prescriptivist has gone back to sleep. It’s a lot more interesting when she’s not around and the descriptivist gets to play. Now, nobody say “woke.”

Before I go, this has nothing to do with words, but it made me smile: from Land of the Leopard National Park in Primorsky Krai, Russia, four endangered Amur tiger cubs playing, recorded by a hidden camera trap. Scientists at the park say it’s the first time they’ve captured four cubs as young as they are at once. Embrace the floof!