It seems rather apropos to talk about scare tactics so close to Halloween. And that’s what a lot of claims of bias are—ploys to create fear and doubt.

Is there bias in the media? Yep. No one could say that there’s not, and I think the 24-hour cable news cycle is partly to blame (that time has to be filled somehow), though not the only thing at fault—the Internet and increasing partisanship must shoulder quite a bit of the responsibility as well.

However, a lot of what is called bias is in the eye of the beholder.

Apparently the usual glowing inauguration story is evidence of liberal bias if it happens to be a Democratic president, especially the first of something (first black, first woman, first Arkansan in the case of our paper and Bill Clinton’s inauguration). 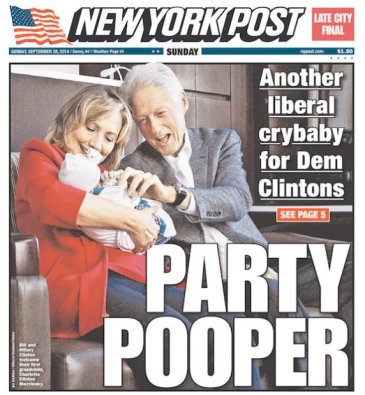 Yes, focusing overmuch on deriding something or someone to the point of excluding anything positive or being all happy happy joy joy while ignoring the negative is clearly bias, though the most partisan among us would argue that it’s truth (that’s bull, but you’ll never get them to admit that). Those outlets are like catnip for those who seek only like minds, but will cause conniption fits among those of us who like our news less filtered through a political lens.

Those same partisans would call coverage that aims to be more complete (though true balance can never be achieved, nor should anyone try for an unrealistic 50-50 split) horribly biased.

In the 2012 election, the nonpartisan 4th Estate project charted coverage of Barack Obama and Mitt Romney. While no outlets were totally balanced, the bias appeared to be predominately conservative, not liberal. Gasp!
Image from 4thestate.net.

Is it bias to report something that may be unfavorable to someone? Apparently so, according to some of the messages I received after last week’s column. Some have taken issue with my reporting of studies showing that conservatives are more likely to believe in conspiracy theories and email hoaxes. That’s not me saying that; I’m simply relaying the researchers’ findings. 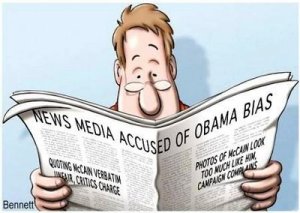 Clay Bennett, you know just how to say it.

When someone claims bias, step back and look at it again; that someone just might be trying to create unmerited doubt in others’ reliability. Be curious and check out those claims using evidence, not opinion, and you might be surprised. If protecting a lie is important enough to cry “bias,” you might want to look into motive.

And if someone constantly plays the victim card any time there’s some criticism of his or her actions (and blaming any scrutiny on a liberal/conservative/crackpot plot), ya might want to rethink your support of that person. If someone continually pulls that card out in the campaign, believe me, it likely will be pulled out every single time someone points out something that the now-elected “victim” has managed to mess up.

(Note to those candidates/officials: When you’re in the public eye, don’t do stupid/illegal stuff. That makes it much less likely that media outlets/partisans will attack you; in most cases, you’re not important enough to merit any vast conspiracy to oust you. Just do the damn job.) 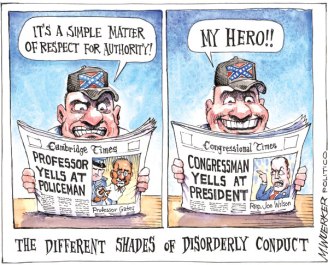 Part of the problem, I believe, is that far too many people have come to accept—and even expect—cherry-picking and opinions in their news. They thus see it everywhere whether it’s there or not, completely ignoring contextual clues such as “I believe, “I think,” “it seems,” or that glaring “opinion.” After all, news and opinion are the same, aren’t they?

No. Not even close.

In the Arkansas Democrat-Gazette, writers’ opinions (not counting reviews) will be on the editorial and Voices pages, or in the various regular columns we print throughout the paper. Occasionally an analysis of a news event may appear inside the news sections, but will be accompanied by an “analysis” label. News stories may report someone’s opinion, but that attributed opinion is not the writer’s.

If Bill Clinton says that John Boehner is a doody-head (or vice versa), that’s his opinion. It’s pretty apparent that it isn’t fact, though some might disagree—that’s their opinion. The only fact to check is whether it was said, and attribute it properly … after we’re done laughing at the playground quality of the insult.

If the news side of the newspaper simply reports that insult, it is not exhibiting a bias or expressing an opinion, but doing its job—to report news. Readers of opinion pages should be expecting opinion, but also that anything stated as fact actually be fact. Yes, sometimes it’s hard to tell, but not often.

If you heard something Bill Maher said that might not actually be true, attribute what was said to him if you really want to use it. Cite your sources or make sure we can tell that it’s your opinion—we may not be able to print that source if space is tight, but if someone asks about it, we’ll be able to tell them where it’s from.

The Democrat-Gazette is not the Weekly World News, and wild flights of fancy should only be expected from those of us who write humor. If you’re expecting hard-hitting news from Otus the Head Cat or humor writer Bill Rausch, you’re looking in the wrong place. And if you can’t tell the difference between fact, opinion and humor … well, I can’t help you. Maybe Bat Boy can. 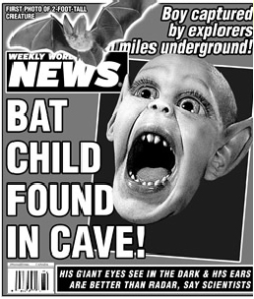 Quite honestly, I’m sure no one looks forward as much to the end of election season as I do; political rhetoric and weasel words always tick me off. Compromise? That’s so 20th century. I’d personally love to clone a few people like past true public servants John Paul Hammerschmidt and Dale Bumpers and send them to Washington … but then what would pundits do if politicians cooperated?

So here I am, yet again citing a study sure to irritate a few people (I should stop being a rabble-rouser … naw).

A Fairleigh Dickinson University poll released in January 2013 found that 63 percent of U.S. registered voters believe in at least one of four political conspiracy theories that researchers surveyed respondents on. By party, 56 percent of Democrats and 75 percent of Republicans subscribed to at least one of the theories: that Barack Obama is hiding information about his background and early life; that the government knew about 9/11 in advance; that Obama supporters stole the 2012 election; and that the George W. Bush campaign committed voter fraud in Ohio in 2004.

What’s likely to annoy is this: In general, the study found that more political knowledge reduced the likelihood of belief in those conspiracy theories. However, the relationship seemed to be conditional on partisanship, with likelihood of belief by Democrats reduced by seven points per current-event question answered correctly, and by two points for independents. 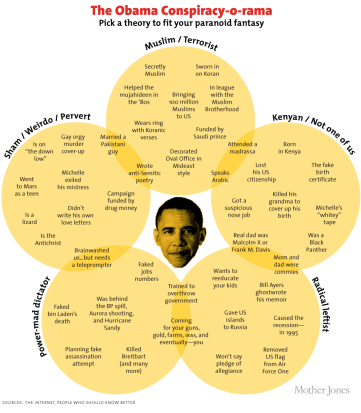 However, for Republicans, each correct answer tended to increase likelihood of belief by two points.

Oh. My. God. Those results are obviously because of the vast liberal conspiracy.

The study report is available here. As I always do when citing studies, you can find it at the embedded link and read it for yourself to make your own judgment. Knowledge is a wonderful thing, ain’t it?

By the way, if you have something you’d like me to check out, send it on. For obvious reasons,  don’t send me opinion, predictions, or broad generalizations … and if the reasons aren’t obvious to you, I got nuthin’. Regardless, I’ll do my best to track down an answer.

Just don’t get mad if it’s not the one you expect.