Hide the kids, the Word Nerd is back!
Image by Saul Herrera/Getty found on The Daily Beast.

Politics and politicians have mucked a lot of things up, but most painful to me are truth and words. Truth, as we know, has become malleable and, for the most partisan among us, whatever aligns with their beliefs.

Confirmation bias? Surely you jest. (And don’t call me Shirley.)

As a proponent of plain-speaking, I can’t help but be annoyed by emails/letters/blog posts/etc. that take perfectly good words, ignore their actual meaning, and use them as a cudgel for their political enemies. (Yea, I got to use “cudgel”! Doesn’t take much some days to make me happy.)

This would be the noun form of refuse, which isn’t our topic today (though a lot of those “refusal” stories are pure trash).
Image found on Trash|Track.

Case in point: “Refuse.” This politician refused to do that. That reporter refused to say this. Most of the time, though, there’s no actual refusal going on … other than people refusing to learn the definition of “refuse,” which to their ears sounds more damning than the words that should be used.

The verb form of “refuse” means to indicate that you will not do or accept something; keyword: Indicate. In today’s political climate, though, “refuse” has come to mean someone just didn’t say or do something, or didn’t do it quickly enough … that’s not necessarily refusal, people. Could be, but without knowing facts, context and motive, it’s a leap to say conclusively that it’s a refusal. Not that that bothers some people. Those county clerks refusing to issue same-sex marriage licenses—that’s refusal … and it’s against the law.

Dictionary.com states that refuse “is direct and often emphatic in expressing determination not to accept what is offered or proposed: to refuse a bribe.” So what I’m seeing here is that there must be intent, and it’s not the intent of the observer.

Sometimes the refusal stories are quite simply false. During the 2010 U.S. House race in Florida, for example, an ad from Democratic incumbent Alan Grayson claimed that Daniel Webster, his Republican opponent, “refuse[d] the call to service.” FactCheck found that Grayson’s own documentation proved the falseness of the claim that Webster “‘was called to serve our country six times during the Vietnam War’ and ‘refused’ each time.”

“records show that Webster was deferred from military service five times due to academic study from 1967 to 1970 (once in high school and four times while he was in college at the Georgia Institute of Technology). Once he completed his undergraduate degree, he was given the classification 1-A (which means he was available for military service) and was asked to report for a physical examination. The documentation shows that on the date of his physical, July 26, 1971, Webster was rejected and given the classification of 1-Y, which means that he was ‘qualified for service only in time of war or national emergency.’” 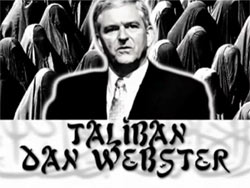 An image from one of Alan Grayson’s ads, this one featuring that “great” nickname … so … not patriotic, and a traitor.
Image found on FactCheck.

Records don’t indicate the medical reason for the classification, but Webster told the Orlando Sentinel it had to do with his feet. As a child, he’d worn corrective shoes with steel plates in them, but the problem was never really corrected. FactCheck notes that the 1-Y classification was abolished months after Webster’s physical; he was then reclassified as 4-F, not qualified for military service.

As an aside, Grayson lost that re-election race, 56 percent to 38 percent, but redistricting in the Orlando area allowed him to return to the House in 2013. Grayson announced earlier this month that he will run for the Senate seat being vacated by Marco Rubio.

The flag is lowered at the White House for the Chattanooga victims. Yes, it wasn’t immediate, but he didn’t refuse to lower it.
Image by Andrew Harnik, AP, found on scrippsmedia.

Of course, Barack Obama seems to be the undisputed king of political “refusal.” There was his supposed refusal to sign an agreement to keep 10,000 troops in Iraq (he inherited a timeline to withdraw, but no agreement, and negotiations broke down between Iraq and the U.S.). Then there’s his “refusal” to order flags flown at half-staff for the Chattanooga shooting victims (his order was simply not speedy enough for some people … and no, he never ordered flags lowered for Whitney Houston—that was Chris Christie in her native New Jersey).

He apparently says “no” so much that … well, it must be the only thing he says. Except he’s not Rosie the Refusal Robot.

No, he’s not a cyborg … at least that’s what the chip in my head tells me.
Image found on jujufeed.

We won’t even talk about all those things (including public records) that are “sealed” but aren’t really.

Again, to refuse to say or do something requires a person’s conscious effort. If someone won’t answer a question asked of him, that’s refusal. If he doesn’t answer a question not asked, it’s not a refusal to comment. I certainly wouldn’t expect any public official to make a comment on every death or event unless specifically asked … there’d be no time for anything else nowadays.

If someone is handed a flag pin but declines to accept it, you can say he’s refused it. Simply not wearing a flag pin doesn’t imply refusal; it implies … not having a flag pin. I don’t have one (butterflies and flowers, yes, but no flags), and I’m not refusing to wear one. Besides, a flag pin is hardly proof of patriotism … support of your nation, now, that’s more like it. I’d love to show my patriotism by letting Luke shred one of those Kim Jong Un or Vladimir Putin scratching posts, but they’re just too expensive (about $7,400!!!).

Hey, is this thing made in China?
Image found on Swaggest.

We have enough trouble with logical fallacies and false choices in political discourse, so why do we keep allowing politicians and others to stretch definitions of simple words beyond recognition? Even worse, for me anyway, much of it is parroted talking points.

Words do indeed evolve, but these usages ignore definitions for the sake of what fits a political agenda. And I think we all know what partisans are more apt to do this … at least those of us residing in reality. 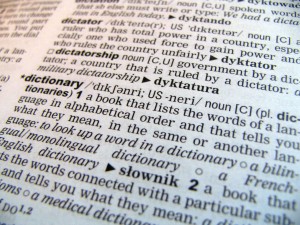 Do you have a monosyllabic version?
Image found on documentsdelivered.

Count this as my refusal to sit idly by while these people basically burn the dictionary. Speaking of, perhaps we should start a fund to buy these guys a few of those big, wordy books. I’m willing to chip in a few bucks.

Now I’m wondering, though … do we also need to hire a reading tutor for them? Considering the stuff they come up with, I’m not all that sure they can read …