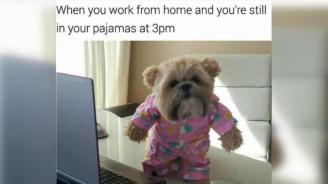 I did put on pants Tuesday afternoon to pick up groceries, but they came off as soon as I was home.
Image found on India Today.

A lot of things reveal themselves as not worth the effort when you’re stuck inside for an extended period of time. Daily showers. Fear of being seen outside in your pajamas. Pants (shorts are the best thing since sliced bread).

Chocolate, though … always worth it … unless it’s the cheap, chalky “flavored” stuff … and that doesn’t deserve to be mentioned in the same breath as real chocolate.

I’ll admit I’ve been watching a lot of Disney+, and that means Frozen, Tangled and other fine bits of “kid stuff” that happens to contain some good lessons for adults. I’m taking a lesson now from Elsa to “let it go.”

Here are a few things I’ve determined over the past few weeks to just not be worth it:

🤪 Worrying about people who read things that aren’t there and attribute wildly misinterpreted thoughts to you. Tell a story about why you’re no math genius even after four years of advanced math in high school and have someone interpret that as a dig toward them when you would have no way of knowing anything about their math prowess? Sure, because you’re psychic! (Usually people think psycho, not psychic.)

Try to convince someone that you don’t moderate comments on the newspaper’s website (on this blog, yes; the newspaper, no) and that you never saw a comment that was removed? You can try, but you’ll fail miserably because that guy just can’t let it or his misconceptions/misinterpretations go, and he and his pals will just keep on keeping on, some of them possibly the guys who keep sending nasty mail to letter-writers’ houses because that’s what you do when you disagree with someone in today’s world. The same type of people think I handle the cartoons … and the news stories … and probably the classifieds.

Yes, that stuff will still bother me because I’m human (despite rumors to the contrary). But I just don’t feel it’s worth the time and worry associated with it.

😜 Explaining the concepts of sarcasm and satire. If they must be explained to you, you just don’t get it … or likely comedy in general. Saying something was sarcasm 24 hours after you said something stupid tells me that someone had to explain why it was ill-advised to say that, especially considering that tone and context are vital to sarcasm. A joke that has to be explained isn’t funny and, I would argue, not really a joke. And coming from someone who really has no sense of humor, it definitely wasn’t a joke.

If you believe that what Saturday Night Live and The Onion produce is true, well, you don’t get satire, which tends to be exaggerated. Even when they’re not all that funny, they’re still pretty clear on being satire. (And if you can’t figure out that a satire website with multiple disclaimers is satire, you probably have reading comprehension issues as well. Sorry.) 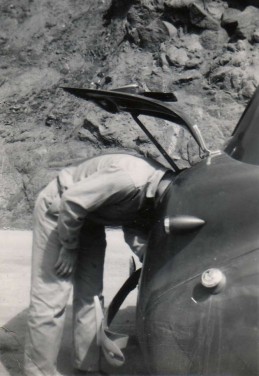 People tend to laugh at silly things all the time without knowing why something strikes them as funny because some things are just inherently funny. It might be someone tripping over their own feet (hilarious when it’s not you), or a spoonerism or malapropism issuing from someone’s mouth, especially if that person is in a position of authority. Or maybe it’s that odd family photo of your grandpa appearing to be eaten by a car trunk.

If you have to stretch to explain that something was sarcasm when it was not presented in a sarcastic manner to begin with, it wasn’t sarcasm, and it wasn’t a joke.

The guy who brought my groceries to the car Tuesday wasn’t wearing this, but it would be cool if he had been. Not that it would protect him from covid-19, but …
Image found on Bored Panda.

🛒 Fretting about things over which you have little to no control. Sure, you might not have grabbed that specific package of chicken or salad if you were in the store, but when someone else is shopping for you, don’t worry about it unless it’s expired. That person, whether a friend, store employee or shopping contractor, is taking the risk to do what you don’t feel you can do yourself. You can advise or give alternatives if something isn’t in stock, but you should be grateful that someone did the job for you in the first place. Being picky at a time like this isn’t worth it. And by the way, be sure to thank whoever did the shopping for you.

🥊 Pointless arguments. When someone is determined that something is true, many times that someone will believe only that which confirms his beliefs. You can argue day and night, pulling out piles of statistics and evidence, but if it doesn’t mesh with his idea of reality or how he’d like reality to be, it won’t matter. Confirmation bias is real, and it’s too strong in some; pick your battles. Sometimes you just have to let it go for the sake of your blood pressure and your sanity.

For some of us, that last part left a while ago.

There are things, though, that are well worth the effort. Whenever I begin to despair, I can always turn to them.

💖 Love of family and friends. Even if you can’t be with them, you can call, text, email or write an old-fashioned snail-mail letter. I do that with my friends, family and co-workers, and it really helps calm the mind. Plus, all the texted jokes and derps I get from one of those people keep a smile on my face when it’s most needed. That’s usually about the time I see someone online talking about some “cure” for covid-19 and I’m turning into Alice from Dilbert, saying, “Must. Control. Fist. Of. Death.” 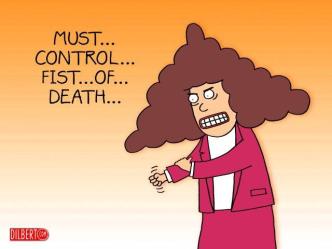 Alice is my spirit animal.

🤣 Silly comedy. A few hours spent with Monty Python (specifically The Holy Grail; The Meaning of Life is a bad idea for someone with stomach issues) or perusing memes on Bored Panda or I Can Has Cheezburger are just the antidote for a world with people who are more concerned with whether they can sit on the beach in a crowd or get their hair cut before medical experts say it’s safe to do so than the people who might get ill and die because they couldn’t wait. I’m fairly sure that my hair appointment made six months ago isn’t going to happen, but I’m OK with it. And if I’m not, I can always watch Tangled again to see how Rapunzel handled all that hair.

🥰 You. You know who you are. Your emails have been a bright spot in my days. Thank you. Have some chocolate. I’ll save some of the good stuff for you.

Pardon me. I need to be alone with the chocolate. I’ll share later.
Image found on Pinterest.