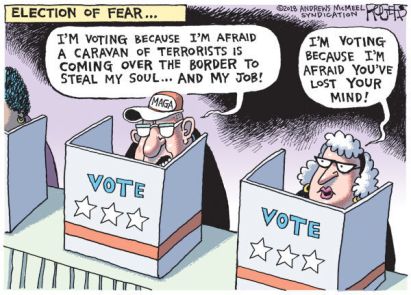 If you’re going to let fear rule your life, you couldn’t have picked a better week to do so. Not that you should. I mean, living in a constant state of fear isn’t healthy … but you do you. (Pssst … your red hat’s on crooked.)

This is the week of Halloween and the end of Daylight Saving for the year. There’s also National Black Cat Day (which was Sunday) and National Chocolate Day (Monday, but every day in my world … I’m not even joking), which could just as well have been combined with Halloween, just like National Caramel Apple Day. Then there’s Día de Muertos (Day of the Dead), which runs from Oct. 31 to Nov. 2. 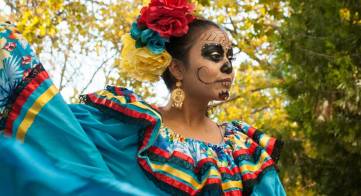 While the Day of the Dead has a few similar elements, it’s not Mexican Halloween, so stop calling it that.
Image found on Calaveras Visitors Bureau.

But really, there’s not much to fear in any of those observances (except for maybe Daylight Saving … it’s not kind to chronic insomniacs; even “fall back” can do a number on me). While Halloween now is more about costumes, candy, and horror movie marathons, Día de Muertos, like the Christian All Hallows’ Eve, All Saints’ Day and All Souls’ Day, is more about remembering loved ones who’ve died (I can’t watch Coco without thinking of the people I’ve lost). Still, Halloween, based on the Celtic pagan religious festival Samhain—the Festival of the Dead, which is still observed today—has that element too. (And yes, I realize I will upset some sensibilities by using the word “religious” … but it’s correct.)

At this time of year it’s believed that the veil between the living and the dead is thinner and you might be able to visit with deceased loved ones. I wouldn’t mind that at all, especially if those loved ones included my mom and grandpa, who would have been 102 on Tuesday. If my aunts Nita and Irene and uncle R.L. wanted to join in, I’d be pinching myself. Luke’s spirit is always with me, so no need to ask for him. Though asking his ghost to stop knocking things off shelves might be advisable … 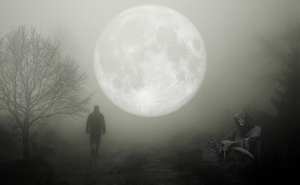 Despite such heartwarming sentiments, some will continue to spread fear—for distraction, their own amusement, or any number of motives that have little to do with real reasons to be afraid. They are apparently fans of the informal logical fallacy argumentum in terrorem or argumentum ad metum—the appeal to fear, to buoy support for themselves by creating fear and prejudice against opponents.

It’s hard to run on your record, especially if you’re an amoral moron. Predicting Armageddon if the other guy gets elected is much easier.

Fear rather than facts is used as the primary motivation to get others to accept something, and often that involves the possibility of something terrible happening, like, say, a stock market crash if someone isn’t elected (or a civil war or worse if someone is impeached or otherwise humiliated), but without actual supporting evidence (facts are hard). 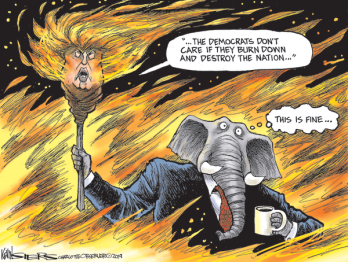 As Logically Fallacious puts it on its blog: “Think in terms of probabilities, not possibilities. Many things are possible, including a lion busting into your home at night and mauling you to death—but it is very, very improbable. People who use fear to manipulate you count on you to be irrational and emotional rather than reasonable and calculating. Prove them wrong.”

And keep a side of beef on hand just in case that lion stops by. Or a horde of hungry relatives.

The appeal to fear can also rope in other logical fallacies, such as slippery slope (if you let women think for themselves, they’ll kill all the men, because … duh, we be crazy), ad hominem (attacks on the person, not the argument, ya big dope) and false dilemma (presenting an either/or argument for something that has many options … though sadly there weren’t any really good ones by the time we got to the 2016 general election). That last one has been used quite a bit in politics, maybe nearly as much as the appeal to fear. 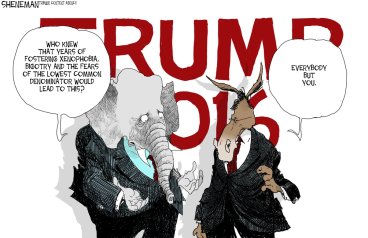 Funny how that happened. Except it’s not.
Editorial cartoon by Drew Sheneman, Tribune Content Agency.

Too many issues have been over-simplified, with nuances ignored and inconvenient facts glossed over (ahem, guns) and people being told “you’re either fer it or agin it.” There’s a vast middle ground where the majority resides, and a range of choices (another name for false dilemma, by the way, is excluded middle). The people there know that few things in life are black and white, and that insisting there are few options only serves to engender division and hate.

Of course, that’s the whole reason people use fear tactics. ’Cause the other side is shifty and evil. And those idiots stole my lunch out of the office refrigerator.

Speaking of hate, a Democrat-Gazette reader questioned the printing of a letter on Saturday’s Voices page titled “About white privilege” that contained the sentence, “So, if you like living, thank a white person.” The reader apparently believes that it was hate speech (another believed I was enabling white privilege and racism … sigh). I respectfully disagree. 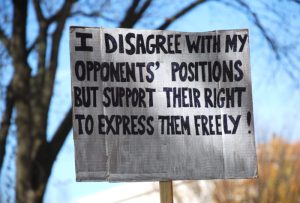 Maybe it’s just me, but I think we should judge hate speech on the context. We can’t exactly get rid of all the words that offend … like white, black, hate … seriously … not gonna happen.
Image found on Juicy Ecumenism.

Hate speech, according to Oxford, is “abusive or threatening speech or writing that expresses prejudice against a particular group.” Even taking it out of the context of the entire letter, it would take a very broad reading of that definition to categorize that sentence as hate speech. While I don’t agree with everything printed on the Voices page (not by a long shot), even opinions one might find abhorrent and odious have a right to be heard—and this was indeed opinion, and it was neither abusive nor threatening, neither of which is acceptable on the Voices page. Falsehoods framed as facts are also unacceptable, but c’mon, you know why.

Everything in the world will offend someone on the planet (even adorable fluffy puppies and kittens, which is just crazy), but we can’t make 7 billion-plus categories for all things without losing meaning. Definitions evolve through the years, as do sensitivities, but if we change definitions to fit what offends every person, it will be awfully hard to communicate. But maybe that’s the point.

Allowances must be made for differences in opinion (not fact; that’s a whole ’nother thing), just as they must be made to live in our society. For example, smokers can light up on private property and outside, but not in government and other buildings (like mine, where you also can’t carry a gun), so people with cigarette smoke allergies like me can breathe inside even though they may have to walk through smoke outside or share the elevator with a heavy smoker. (Sudafed, please; my head’s killing me.) 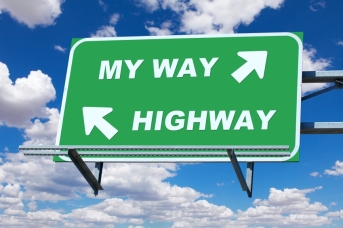 This won’t work, as much as I’d like to tell smokers to take a hike. Some of them are kin, so we compromise.
Image found on Today’s Parent.

On the Voices page, if I’m doing my job you’ll see a variety of opinions, some that you’ll agree with, and some you won’t, but those letter-writers have the same rights as you do. It’s compromise (gasp) that helps us get along.

So we can try to seek the middle ground and prize facts over emotions, or we can keep getting upset about every little thing and care more about being politically correct than correct.

But hey, why not write a letter to the editor? You’ll feel better! And … uh … I can fill my page. Thanks.

(Note to readers: Yes, I know I usually put a lot more links in to more information when I write about things like logical fallacies or unfamiliar holidays or customs, but I was a bit rushed off my feet this week. I’ll do better next time.)

Just because I love you guys …
GIF found on Tenor.