Yeah, I’m the boss here, what of it?
Image found on Canidae.

A friend reminded me that Saturday marked a year since Joey the Garden Cat passed away. For those who don’t know, Joey was a semi-feral cat who pretty much ran THV, Channel 11, in Little Rock.

In 2007, he became friends with his predecessor, Larry, before anyone at the station ever saw him, and he soon was a regular visitor to the Weather Garden, playing and napping with his buddy.

Larry, you make an excellent pillow!
Image from THV11.

When Larry died later that year after being struck by a car, Joey stuck around. While Larry didn’t like coming inside much, Joey loved it, and would often traipse through the studio during broadcasts. 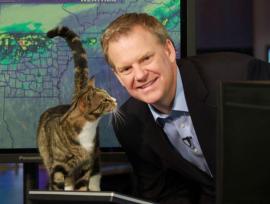 Hey, Tom, enough with the mugging … get back to work!
Image found on TVNewsCheck.

Joey definitely loved the ladies, but had a special place in his heart for Meteorologist Tom Brannon. He had him pretty well-trained to give him treats and cuddles whenever he wanted … and he liked supervising Tom’s work (sorta sounds like Luke!). Joey, having survived bone cancer, suddenly became ill last August, and died of what was later determined to be FIP (Feline Infectious Peritonitis). In his memory, Friends of the Animal Village took over the campaign to build Joey’s Playroom. Want to donate? Go here.

In Joey’s honor, a few more furry newsroom friends. I’m gonna go hug my boy. I’d love to take him to work, but I’d never get anything done. 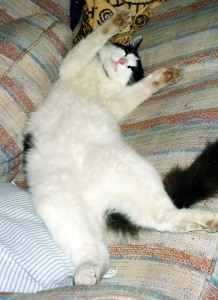 That’s right, Mom. This belly’s not gonna rub itself, ya know! 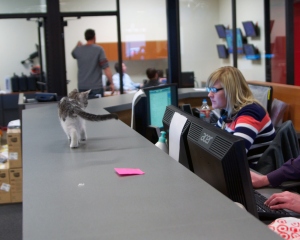 OK, people, I want you to write tight and bright … and get me some salmon!
Image found on Fox13Now.

She’s back there not working again, isn’t she? Back to work, lady. Stop with the waving!
Image found on KRCG Pets Pinterest. 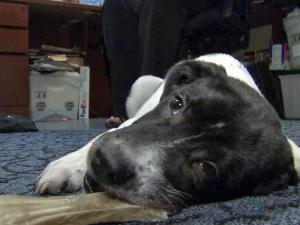 Thanks for the bone, fella, but could you clean under your desk? I wanna take a nap …
Image found on WRAL. 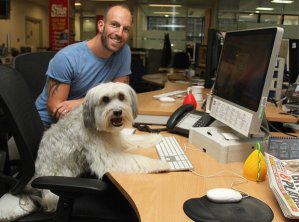 Wanna go pee on the press? Do ya, boy?
Image found on DailyStar.

My eyes aren’t even open yet, and I can tell this newsroom is stuck in the ’70s. Can you at least get rid of that orange furniture??