I’m positive the hoomin is trying to make me look silly.
GIF found on Twisted Sifter.

It’s hard sometimes to keep a positive outlook, what with all the people convicting people without a trial based on political considerations and conspiracy theories (I am sooooo tired of that, especially the people who act like it’s a done deal … of course, if someone has already pleaded guilty, that’s another story), plus the people who insist on disregarding guidelines that are meant to protect everyone and that don’t actually violate your rights. Sigh.

I don’t particularly like quarantine, but I know it’s for the greater good, and since I have pre-existing conditions that make me more vulnerable, I have no problem limiting my exposure to others or wearing a mask anytime I go outside, even if just to get the mail. Besides, my masks are cute, and the purple ones have filters to help with my grass allergy.

What has been a saving grace for me during these past weeks is access to all sorts of streaming options. Rewatching Disney favorites, the Avengers movies, and assorted comedy specials and sitcoms has helped remind me that there are things in this world that have nothing to do with politics (thank God!), and that laughter helps relieve stress and anxiety. After all, May is Mental Health Awareness Month, and Lord knows we could all use a respite from quarantine.

Well, at least Jerry and Anne are back together.
Image found on ABC News.

So the news that Jerry Stiller had died Monday hit me hard. Stiller, who with his wife Anne Meara had been part of The Compass Players, which became the Second City improv troupe (and one of the top male-female comedic duos of all time), was always able to make me laugh with his over-the-top reactions to … well, everything.

Though he also played dramatic characters, playing a cranky dad seemed sort of a niche for him, and watching him as Frank Costanza on Seinfeld made me happy. The character was so much larger than life that I didn’t realize until I read his New York Times obit that he appeared in only 30 of the 180 episodes. (He played a similar character on King of Queens, but since I’m not a Kevin James fan, I didn’t watch it.) 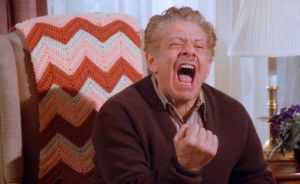 How most people remember Frank Costanza, played by Jerry Stiller. At least it doesn’t involve the manzier.
Image found on Pinterest.

Peter Keepnews wrote in that story about a Web-only clip of Stiller and Meara discussing obituaries that was one of several released by son Ben in late 2010 and early 2011: “In that clip, Mr. Stiller says he is ‘shocked’ that The New York Times might have already prepared their obituaries and wonders whether the newspaper is ‘up to date’ on his having worked with Veronica Lake in a production of Peter Pan (about six decades earlier). And Ms. Meara reveals that years ago Mr. Stiller had persuaded The Times to publish her father’s obituary by falsely claiming that he had written material for their comedy act.

“Mr. Stiller’s agitated response: ‘What you just said is going to get us in trouble with The New York Times! I may never get an obit!’”

But that reaction is reminiscent of many of the comic characters Stiller played over the years, most notably George’s easily perturbed dad on Seinfeld.

In 2013, a Festivus pole made of beer cans was erected in Florida’s capitol to protest a Nativity scene in the capitol rotunda.
Image found on NPR.

I’ve mentioned his “Serenity now!” cry a few times as part of the reason for the name of this here blog, Serenity is a Fuzzy Belly, and the whole idea of Festivus delights the imp in me. Airing of grievances and feats of strength? Sounds like a family dinner to me! We didn’t have an aluminum pole, but we did have a silver tinsel tree for a while (Frank was right; tinsel is distracting).

Still, he wasn’t quite the curmudgeon off-screen, and Jason Alexander, who played George, called him “perhaps the kindest man I ever had the honor to work beside. He made me laugh when I was a child and every day I was with him.” Actor and comedian Michael McKean tweeted, “He and his wife Anne were royalty but they would’ve laughed in your face if you said so. And then hugged the hell out of you.”

Reminds me a lot of my mom.

Much of Stiller’s comedy was based on arguments between his parents, reported The Washington Post. In his 2000 memoir Married to Laughter, he said that when he was a boy, he won tickets to an Eddie Cantor performance at the Rockefeller Center and took his bickering parents with him. After a while, they began to smile. “I had brought them together. I had done something that seemed impossible. Eddie Cantor could bring peace to my family. From that moment I really wanted to become a comedian.”

The Post dug up an old interview Stiller gave to the Sydney Morning Herald in 1999. What he told the Herald sounds like good advice, especially in light of the quarantine: “Laughter is the answer to all the pain I experienced as a kid. When I’m not doing it, it all gets eerie and weird. I am only left with the memories that inhabit me that can only be knocked out by hearing laughter.”

Maybe Reader’s Digest has been right all this time: Laughter really is the best medicine.

Even the Doctor is rolling his eyes over all this political crap.
GIF found on giphy.

We should all remember to keep things in perspective, which can be pretty hard nowadays with so much misinformation taking center stage, and people taking their cues from pundits who spout opinion with which they agree rather than from experts with relevant knowledge. (Experts? Psssh! What do they know?) Not only is that dangerous to our peace of mind, it’s dangerous to our nation.

The minds of those people won’t be swayed, so it’s up to those in touch with reality to speak up, show proof, and reach out to those willing to let reality in the door.

Then when we get frustrated with that, it’s time to take a break. A little Stiller and Meara might hit the spot. Can’t hurt.