My boy, Lucas “Luke” McCain Looper, just a few days after I adopted him. He doubled in size over the years and knew how majestic he was, so if you didn’t compliment him on his great beauty, you’d hear about it.

Just after Friday night turned to Saturday morning, I lost my best friend. It was quick, and thanks to medication, painless, a mercy after his sudden collapse Friday evening.

There will be no more nose-booping, cuddle sessions or Galloping Goofball runs in the middle of the night, at least for a few months, because I can’t handle the thought of taking on another furry one right now. Eventually, yes, I’m sure I will have a cat or two or three. But now? No. 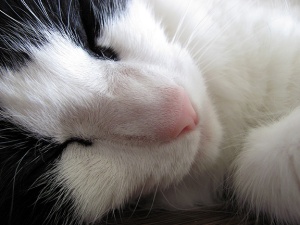 That nose was just so boopable.

Luke was an enigma when he was brought to me by my landlord’s son in 2003 a few months after my grandpa died. He was 9 pounds at the time, and appeared to be female. Julian had found him crying and circling his car in the parking lot of McCain Mall (hence his middle name) when he got off work, and immediately brought him to me. As soon as I saw the terrified but beautiful Holstein-patterned fuzzball in his arms, I knew I had to take care of him.

My mom’s favorite picture of the Fluffernutter.

Because he cried and chatted so much (perhaps why he’d been dumped), I named him Lorelei in honor both of the lead character in Gilmore Girls and the legendary German siren. When a couple of weeks later his true gender was revealed, he became Luke. (Wait … was my cat transgender?)

And while he was so large that all who saw him thought he was full-grown, it turned out he was actually 6 to 8 months old, and would grow even bigger (19 pounds at one point!). He quickly outgrew the cat carrier, and I had to go to the dog-sized carrier. And this one had doors on the front and top so we wouldn’t have to take it apart (most of the time) to get him out at the vet’s office. Didn’t stop him from pulling the occasional Mission Impossible pose every once in a while, though.

… or he’d just glare at people at the vet’s office who managed to get him out of the carrier.

I soon grew to love his many quirks. At one point, he was terrified of the carpet in the front room and would make his way to his spot in the front window using the furniture as a bridge (but, hey, that carpet was ugly). He also never jumped more than a couple of feet until the day he decided something in a friend’s fenced backyard was just too inviting. After that you couldn’t keep him from heights; one of my favorite pictures is of him on the roof, striking a “Lassie” pose.

Who is this Lassie of which you speak?

He was the enemy of the neighborhood squirrels, and a friend swore he once saw him catch a bird midflight. Not long after, he would become an indoor-only cat after blue jays who had divebombed his hard head the year before started going after his soft neck (that would teach him to go after territorial birds who didn’t understand they didn’t own the houses there). The transition inside led to the discovery that he was allergic to grass. Because, you know, anything to be more interesting.

And there was his obsession with his pink bunny …

My, Luke, what human feet you have! Oh, those are your grandma’s? Never mind.

Luke quickly became a favorite of my family. I brought him with me on a visit home immediately after he was neutered, and when I didn’t bring him the next time, I was ordered by my parents to bring their “grandkitty” whenever I visited. His favorite spot when there was usually wherever my mom was, and even when visits were only by phone, he wanted Grandma to know he was there. 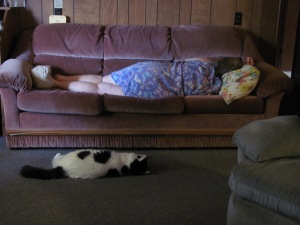 This one always cracked me up … sweet little boy.

He was there for me when my dad died in 2006. When I shattered my right humerus in 2009 and when I suffered a stroke in 2015, he pretty much was constantly at my side to make sure I was safe while I recuperated (well, ya know, I might break again). Any time I was feeling down, he was there, often doing something extraordinarily goofy. He did the same thing for my mom when she was dealing with renal cancer.

When he first started having kidney issues a couple of years ago, I realized that his time with me could very swiftly end. However, any time he was ill, he rallied and was soon back to (ab)normal, often living up to one of his nicknames, Lucifer (and Stinky McPherson, Cranky McGee, Gooficus Maximus, Butter Bear, Binky Bear …). 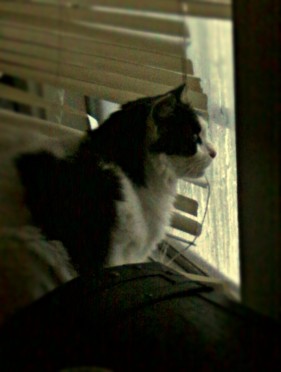 There’s stuff out there, Mom. You should stay in here with me and not go to work.

When he collapsed Friday evening, crying in pain, I hoped it was just something temporary and that he would rally again. I rushed him to the emergency vet, but would soon discover that he had a large mass compressing his internal organs. On the X-rays, his intestines were barely visible and only one kidney could be seen. I knew that at 14 he likely would not survive a surgery to try to remove the mass, so I made the heartbreaking decision to let him go.

Pretty much every day with Luke. I miss this already.
Illustration by my favorite artist/cartoonist, John Deering.

While I know it was the best thing for him, I can’t avoid my feelings of guilt. Guilt that I didn’t see what now seem to have been obvious signs that he wasn’t feeling well—the biting (which he had done again two days earlier), increased crankiness, fluctuating appetite. Guilt that I don’t have the money to pay for oncologists and operations that might have given him a few more months. Guilt that I moved him away from the computer whenever I needed to work. Guilt that I didn’t take every opportunity possible to cuddle and be there for him as he was for me whenever I was ill or depressed.

Ohhh … you wanna work, do you?

It’s hard to write this now because he was so much a part of my life, but it’s necessary as I work through my grief, even as I cry with every memory. I still see his adorable little face peeking around doors, and him in his favorite spots on the couch, in the window or on the scratch pad on the end of my bed. He brought me so much joy, laughter and comfort that he will always be in my heart (if not on my phone’s home screen right now … just too painful). But he always hated it when I cried, so I know he wouldn’t want me to be sad.

Pretty much his attitude about people disturbing his sleep … unless it was Grandma.

In the end, I’ll just remember that I loved and was loved by a fluffy ball of fur and attitude named Luke who with a head-butt, or touch of his perfect little pink-toed paw, or boop of his little pink nose, or the occasional time he’d actually let me rub that floofy belly could make me forget everything bad in the world. People may think I rescued him, but he was the one who did the rescuing.

We should all be so lucky.

This belly’s not gonna rub itself, ya know!

I apologize to those of you who expected me to opine humorously on truth or words today. I had planned to tackle “covfefe” and other nonsense words, but you know what they say about plans.

I’ll get back to my usual abnormality next week (including those Twitter burns) … as long as nothing else happens. I need nothing else to happen.

Thank you for your indulgence of a somewhat-crazy cat lady who is, at the moment, without a cat. Luke’s gonna be a hard act to follow.