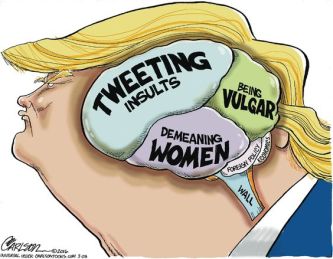 I’m surprised the policy portions are shown as large as they are. Hell, the insult portion should take up most, if not all, of that thing.
Editorial cartoon by Stuart Carlson, carlsontoons.

When it comes to the president and the many (many, many, many …) insults he assigns to those who displease him, I tend to ignore them since so many sound like they were hatched on the playground. Loser? Sleepy Eyes? There are 12-year-old bullies with their heads in their hands in embarrassment.

However, when a retort to those insults both brings back an old, underused word and sends people en masse to the dictionary … well, I have to admit that I was a little proud underneath all that chortling I was doing the other day.

Sure, it might not have been Kim Jong Un personally who used the word “dotard” in referring to the president (Kim’s statement was translated into English by the official state news agency, apparently using an old Korean-English dictionary), but the very fact that it was used at all warmed the cockles of my heart. Word nerds like me just love when words used by Geoffrey Chaucer, William Shakespeare and J.R.R. Tolkien pop back up in the mainstream.

Same.
Image of Funny or Die tweet found on empirebbk.com.

Dotard, meaning a person in his dotage/old age (according to Merriam-Webster) or an old person who has become weak or senile (according to Oxford Dictionaries), traces its lineage back to the 14th century, when it meant “imbecile.” Hardly a nice thing to call someone, but slightly better than what Anna Fifield, the Washington Post Tokyo bureau chief who covers North Korea, said the Korean word in question, “neukdari,” actually translates to: “lunatic old man.” Merriam-Webster reported a spike in look-ups for “dotard,” saying searches were “high as a kite.” Which I’m assuming means not one of Charlie Brown’s kites.

“Lunatic old man?” Nah … but when a crazy guy calls out our crazy guy, it may be the beginning of the end.
Screenshot from Anna Fifield’s Twitter page.

Dotard is hardly the only old word that makes me happy (yeah, I’m weird, but you knew that). My love for Shakespearean insults continues unabated, but more than old insults cause me to break out in happy giggles. There are just some words that deserve new life in English today, if just because they amuse me.

💊 Apothecary—“Pharmacist” is just such a dull word when compared with “apothecary,” which Oxford defines as “a person who prepared and sold medicine.” The mere sound of this is music to my ears.

😈 Blackguard—It seems I have to watch really old movies or read period novels to find this word (pronounced “BLA-gerd) for scoundrel. 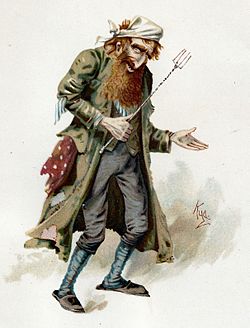 Fagin from Oliver Twist was certainly a blackguard.
Image found on Wikimedia Commons.

Originally it was two words and signified servants, especially those in black livery, but by the mid-18th century it meant someone of poor character. The word is so much fun to say that I keep trying to find ways to use it … haven’t been all that successful yet, though. Some have taken to spelling it closer to how it’s pronounced (blaggard), but there’s no romanticism there.

🔱 Fandangle—The word “fandangle” might be, as its Oxford definition says, “a useless or purely ornamental thing,” but I don’t care. Sometimes you get tired of using “whatchamacallit,” “whozit” and “thingamabob” to describe whatever that thing is that your nephew gave you for Christmas two years ago.

🥛 Milksop—Whether it means an unmanly man or actual bread soaked in milk (c’mon, add an egg, vanilla, and some cinnamon and fry that sucker up!), it’s a word that may not be used as much as “milquetoast,” but it’s just as descriptive and enjoyable to say … especially if it irritates someone (yep, I have a friend who hates it). Did you forget that I’m a little sister?

Chocolate French Toast is the kind of milksop I can get behind.
Image found on Handle the Heat.

🗡 Bodkin—This is another word that’s just a blast to say. It originally meant a dagger or a tool used to pierce leather, but it also became part of a minced oath in England, “Odds bodkins,” which meant “God’s body.”

Just one more way to cuss without resorting to going blue. While we’re at it, bring back gadzooks, jumpin’ jehosaphat, and zounds. I have some cussing to catch up on.

🃏 Scaramouch—Without even going into the whole Anthony Scaramucci thing (please don’t make me), this word for a boastful but cowardly person (a stock character in commedia dell’arte) has always been one of my favorites. And yes, I’m a huge fan of “Bohemian Rhapsody.”

🔇 Gruttling—Whenever you hear that weird unidentified noise just as you’re about to drop off to sleep, you’ve heard “gruttling.” The old word chiefly used in Norfolk and Suffolk in England is so much more interesting than “weird noise.” And whatever that noise was, it needs to stop, at least until I have another critter to protect me.

🗣 Brabble—When a word, meaning to argue loudly about matters of no importance, so perfectly describes much of politics today, it should definitely be used more. Seriously, if you think someone kneeling during the national anthem is more important than health care, nuclear war or hurricane recovery, you’re brabbling. 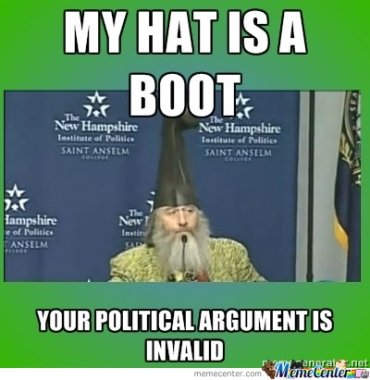 🙄 Perissology—This word, which means using more words than necessary to get the point across, should be a favorite of copy editors who often have to take a scalpel to overwritten prose. It comes from the classical Latin, according to World Wide Words, but didn’t come into English until the 16th century, and still isn’t used all that much.

In that spirit, when writing this column maybe I just should have said, “Hey, I like old words” and left it at that. But I have space to fill, sooo …

In a time when we are inundated with words that mean very little and aren’t much fun—like foodie, swag, job creators and chillax (really???)—we need more words that conjure up great imagery and amusement.

Maybe it’s just the word nerds like me who get excited about uncommon words—need I remind you of my love for persnickety, bumfuzzled and the like?—but the English language could do with a little shakeup every once in a while, with a few good old words thrown into the mix.

If nothing else, they’ll confuse the non-word nerds. Sometimes that’s all the encouragement needed.

It’s OK, Cass. I’m sure you’re not the only one who’s confused.
GIF found on Rebloggy.