It always goes wrong around “Prepare to die.” Can’t figure out why.
Image found on Pinterest.

Inigo Montoya has been in my head an awful lot lately. Typically it’s the usual suspect: “Hello, my name is Inigo Montoya. You killed my father. Prepare to die.”

Don’t, by the way, say that out loud unless you’re alone. Not everyone is a Princess Bride fan (HOW is that possible?????), police might be called, and it would just be a whole big embarrassing thing. While your cat, dog, spouse, child or friend would probably just roll their eyes when you say it for the 14 zillionth time, people who don’t know you might think you’re threatening them. They might not understand that you’re not dangerous … just a little weird. Like quoting Young Frankenstein, the assorted works of Monty Python and The Princess Bride is weird … pshaw!

Inconceivable, right? No one would ever do that!

Cue the eye-rolling. And the flashbacks to a neighbor telling childhood me that I shouldn’t use a word if I didn’t know what it really meant after I blurted out a crime word heard on the news that had no relation to what my friend and I were play-acting (not to go into too many details, it involved a pie and a sexual crime … yeah). I’m still embarrassed by that, but I learned and became the word nerd I am today.

As much as I really wanted to stay out of this whole impeachment thing, I find my inner word nerd too annoyed by word misuse related to it.

I’ve been tired of this crap since it started since no one seems to agree on what a fact is other than it’s whatever makes my side look better than the other side.
Editorial cartoon by Signe Wilkinson, Philadelphia Inquirer.

First of all, yes, the president was already impeached, as it is the House that has the sole power to do that. The trial (such as it is) in the Senate is to determine if he should be convicted and removed from office. Impeachment doesn’t mean removal, but rather that a government official has been formally charged with a serious crime in connection with that official’s job. In justice system terms, impeachment would be equivalent to grand jury proceedings/investigation; there’s been no trial till now, so slow your roll on the whole “no due process” rant (yes, I deserve some derision for “slow your roll,” I know).

Three presidents have been impeached, but none have been convicted … yet. If Richard Nixon hadn’t resigned, there most likely would have been four impeached presidents, and possibly a conviction. Only one president, Andrew Jackson, has been censured, which isn’t in the Constitution, and would not result in a trial or removal.

It’s like divine providence that the “p” is silent.
Editorial cartoon by John Cole, Scranton Times-Tribune.

And no, despite what has been said recently regarding the Trump impeachment and what was said in 1998 to describe the Clinton impeachment, it is not a coup. The defining element of a coup, wrote PolitiFact in an October article, “is that it is carried out beyond the bounds of legality.” A 2013 report by the Coup D’etat Project at the University of Illinois’ Cline Center for Democracy, cited by PolitiFact, defines it as “the sudden and irregular (i.e., illegal or extra-­legal) removal, or displacement, of the executive authority of an independent government.”

Coups are often violent, but it’s not a necessary part of a coup. Still, that doesn’t mean that that’s what’s happening now. Legal scholars point out that impeachment is explicitly described in the Constitution, and there is nothing beyond the bounds of legality about it.

Lead author of the Cline Center report, political scientist Peter F. Nardulli, told PolitiFact, “What is going on today in the United States is a constitutionally sanctioned process that is an integral part of the checks and balances that have been vital to the longevity and success of the U.S. Constitution and the republic it created.”

The Cline Center defined 12 categories of coups, most of which don’t come close to what has been implied. The closest match might be a counter-­coup, “the elimination of a usurper by members of the prior regime within a month of the initial coup.” However, considering that Donald Trump was placed in power by the electoral college, not through a coup, if he’s removed, elected Vice President Mike Pence would take office, so … not a coup or counter-coup.

Constitutional process, that. I know … so unfair.

One other word has irritated me probably more than it should: transcript. A transcript essentially is an official catalog; for students it is of their courses and grades, while for courts and other venues, it is a written copy of what was said.

Can we agree to put aside politics and … yeah, I can’t even finish that because I know it’ll never happen.
Editorial cartoon by Dana Summers, Tribune Content Agency.

What was released of the July 25 Zelensky call is not a transcript, no matter how many times it is referred to as one, whether or not it’s in all-caps (if it is, it just makes it more annoying). On the front page, it clearly states that it is a memorandum, and at the bottom, it says, “Caution: A memorandum of a telephone conversation (TELCON) is not a verbatim transcript of a discussion” (my emphasis added). The text comes from the notes and recollections of those assigned to listen, it states, and the accuracy can be affected by poor connections and variations in accents and interpretations.

So, memo does not equal transcript. Please make a note of it to save word nerds the annoyance. While you’re at it, realize that even the memo is damning.

Politics has the tendency to misuse words for its own purposes, which is one of the many reasons I’m not a fan. Gone are the days when politicians meant what they said, when you could trust someone like John Paul Hammerschmidt or Dale Bumpers to do what’s best for the people rather than what’s best for the party or a political career.

I don’t see that changing anytime soon. Which means word nerds like me will keep reminding people that those and other words don’t mean what they think they mean.

What’s the definition of insanity again? 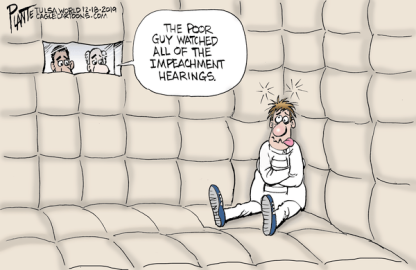 And that was before the Senate trial even started!
Editorial cartoon by Bruce Plante, Tulsa World.