When I was in high school and college, I was lucky to have history and social studies teachers who truly loved what they were teaching and believed in “warts and all” education—the good and the bad. (Thanks, Mr. Elsken!) That meant that blots on our history like Manifest Destiny and slavery would not be ignored, and the effects of jingoism on the understanding of reality couldn’t be discounted. 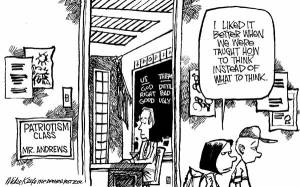 This, luckily, was not the education I received.
Editorial cartoon by Mike Keefe, Denver Post.

I’ll pause while our most conservative readers get all the “damn socialist” epithets out of their systems. Never mind that my high school was far from a bastion of progressive thought.

Done? All righty, then …

For those who don’t know, jingoism is defined by Webster’s as “extreme chauvinism or nationalism marked especially by a belligerent foreign policy,” or “the feelings and beliefs of people who think that their country is always right and who are in favor of aggressive acts against other countries.” (Chauvinism here refers to the legend of Nicolas Chauvin, supposedly a French soldier famed for his excessive loyalty to Napoleon.)

Patriotism is good and to be desired, but blind (and likely uninformed) patriotism, especially when combined with partisan politics … eh, not so much. Then it apparently becomes “American Exceptionalism.” 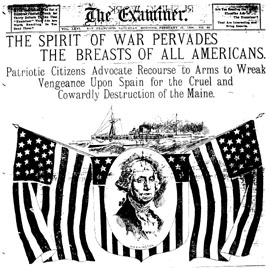 Is that saber-rattling I hear?
Image found on humboldt.edu.

The Grammarphobia blog cites the Oxford English Dictionary and its tracking of jingoism’s origins, saying “the word originated in the 17th century as ‘jingo,’ which the dictionary defines as ‘a piece of conjurer’s gibberish.’” The blog continues: “The word ‘jingo’ took on its political meaning in the 19th century when it was used as a nickname for a supporter of the British policy to use the Royal Navy to resist the advance of Russia during the Russo-Turkish War in 1877 and 1878.” A song sung in British pubs at the time helped popularize the word. George Holyoake, a British radical, is credited with coining “jingoism” in referring to the song in a March 1878 letter to the editor of a London newspaper.

Before the century was out, “jingoism” had traveled to the U.S., gaining fresh currency through the Spanish-American War and the yellow journalism that fed it.

I was reminded of the concept of jingoism while going through submissions that, yet again, relied on old saws about America’s position in the world at large, such as the U.S. having the best health-care system in the world. While jingoism is historically tied to war and foreign relations, its essence has filtered into everyday life, causing normally sane people to blow a gasket if someone, say, doesn’t wear a flag pin. 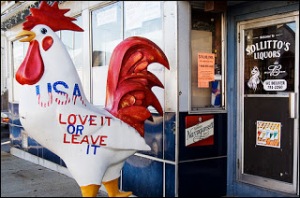 Read the rooster, you commie!
Image found on FollowThePiper.

No, I’m not an evil commie trying to run down America; I love my country and want nothing but the best for it. I’m simply a realist advising a bit of perspective. Actually, perspective would be for the best, and not just for my sanity.

As far as our health-care system goes, while we’re No. 1 in total health expenditures as a percentage of gross domestic product (woo hoo, we’re spendthrifts!), we’re more than a few steps down the list in general health outcomes, quality and efficiency, among other measures quantified by groups like the World Health Organization (37 out of 191 nations) and the Commonwealth Fund (11 out of 11). 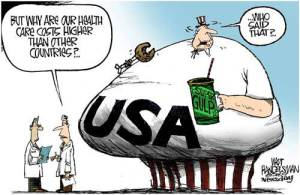 Gosh, I don’t know why that would be!
Editorial cartoon by Walt Handelsman, Newsday.

The Commonwealth Fund, a nonpartisan think tank based in the U.S., has ranked the U.S. performance last five times since 2004. Its last comparison was done before the Affordable Care Act took full effect, and the group surmises that it likely will improve the U.S. marks. It now ranks 11 developed nations (up from seven in 2010), and the U.S. comes in last or near last in access, efficiency and equity. The U.S. did well in preventative and patient-centered care, but lower scores on coordination and safety pulled its average down on the overall quality ranking.

Yes, people from other countries often come here for treatment, but that’s no reliable measure—Americans, too, go to other countries for medical procedures, often because they’re less expensive elsewhere.

And yes, Americans are more likely to survive cancer or stroke, and are more likely to live longer if they make it to 75. But data gathered by the National Research Council and the Institute of Medicine showed that Americans die more often from injuries, homicides, alcohol and other drugs, and have some of the worst rates of heart disease, obesity, lung disease and diabetes.

But hey, if you keep repeating that story about our having such a wonderful system, even if it doesn’t actually become true, a whole lot more people will believe it. And people like me will just have to deal with our exploding heads. 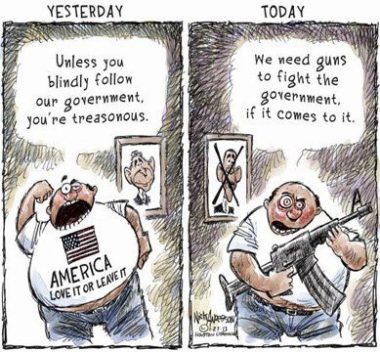 OK, what counts as patriotism today? I didn’t get the memo.
Editorial cartoon by Nick Anderson, Houston Chronicle.

Even before cable and the Internet and their constant catering to confirmation bias, the American brand of super-patriotism was in full display. In 1947, existentialist Jean-Paul Sartre wrote about it in The Nation:

“It is something outside of the people, something presented to them; the most adroit propaganda does nothing else but present it to them continuously. It is not in them, they are in it; they struggle against it or they accept it, they submit to it or reinvent it, they give themselves up to it or make furious efforts to escape from it; in any case it remains outside them, transcendent, because they are men and it is a thing.

“There are the great myths, the myths of happiness, of progress, of liberty, of triumphant maternity—and then there are the Americans. … Perhaps nowhere else will you find such a discrepancy between people and myth, between life and the representation of life. An American said to me: ‘The trouble is that we are all eaten by the fear of being less American than our neighbor.’ I accept this explanation: It shows that Americanism is not merely a myth that clever propaganda stuffs into people’s heads but something every American continually reinvents.”

Nope, sorry, even fiction doesn’t want to get tagged with this crap.
Editorial cartoon by John Branch, San Antonio Express-News.

Well, no one can say we’re not inventive. Too bad so much of it is often jingoistic tall tales. How ’bout we try this: Admit America is great at a lot of things and terrible at a lot of things. If we could clearly see our nation, there would be no need for these stories.

Our history is full of the awe-inspiring and the awful, and ignoring the embarrassments because they make us look less than amazing is nothing but fantasy. Just as teaching only the abhorrent parts of history would be inadvisable and unrealistic, so too is focusing only on what pleases us. What was that song from The Facts of Life? “You take the good, you take the bad, you take ’em both …”

Believing we’re the best at something when we’re not just means we’ll keep living with lowered standards because, hey, we don’t need to improve; we’re great! Likewise, believing we’re the worst makes us supremely cranky, and nothing, no matter how positive it is, will make us happy. 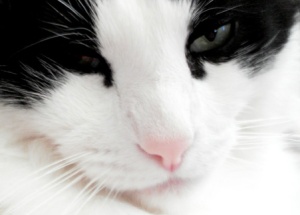 Who you callin’ cranky??

It also means that truth means nothing and we might as well paint signs on our foreheads reading “dupe.”

Then again, some of us don’t mind living in reality, no matter how unpleasant it might be at times, simply because it’s true. It all comes down to perspective.

And chocolate doesn’t hurt either.