On a shelf in my office is a handmade Christmas card from a friend, with a photo of a restaurant sign that had lost a letter, reading “Seat your elf.”

Not the Christmas card, but along the same lines. And now we know Santa stores his elves at a McKinney, Texas, U-Haul in the off-season.
Image found on SignSpotting.

I love things like this. Sometimes it almost seems gravity has a sense of humor since so many letters fall off signs like this. When I was growing up, there was a Church of Christ along U.S. 71 on the way to Fort Smith, but the T was always falling off its sign or otherwise disappearing. I often used to joke with a friend named Chris about having a whole church devoted to him.

There are also the signs that are good advertisements for every signmaker but the ones that made them, with misspellings galore.

And then there are protest signs, more proof that you should always wait at least an hour, then reread what you wrote, or have someone else read it. Passion is a good thing, but when combined with uncontrolled anger, it tends to cloud thinking … but it gives the rest of us a good laugh (so thanks for that, I guess). 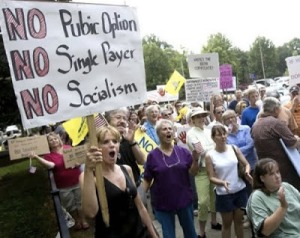 Spelling? Not so much … even sadder is that this is reportedly from a Wisconsin teachers’ union rally.
Image found on thepoodleanddogblog. 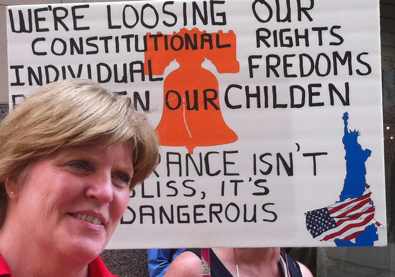 Sorry, I can’t hear you over your ignorance of proper spelling!
Image found on CapitolFax.

Sure … now can you tell what socilism is?
Image found on The Wondrous.

Soooo … would that be like a poly-cotton blend?
Image found on RegressiveWatch.

He even has a whole army of them!
Image found on Nicole Bonnet’s Twitter.

If only these protesters would take a hint from these participants at the 2010 Rally to Restore Sanity and/or Fear. Good advice … 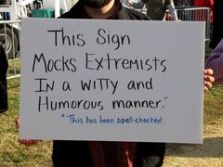 Spell-check? What’s that?
Image found on The Schumin Web. 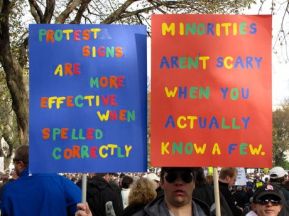 The hell you say!
Image found on The Schumin Web.