Reason 5,046 I’m not a fan of politics: Strict ideology makes enemies of those who veer from the party line, such as, oh, I dunno, people who think for themselves.

It’s also why I don’t claim any party. Mention party to me, and I think of myself off in the corner trying to avoid eye contact, except perhaps with the host’s cat. OK, not really, as I don’t do parties if I can help it. Introverts gotta introvert. It takes something really special to get me out of the house.

But since I don’t drink, that’s cranberry ginger ale in that glass.
Image found on Pinterest.

I can only roll my eyes at the shunning of Mitt Romney for not falling in line with orthodoxy and the apoplexy over Nancy Pelosi’s ripping up her copy of the State of the Union address (calm down, folks, she is not mandated to preserve a copy of the speech). The same goes for the anger over the president not shaking Pelosi’s hand and the gloom-and-doom forecast after the president’s acquittal (and no, it doesn’t mean his impeachment is erased; like Clinton’s, the stain remains).

The loudest voices tend to come from those furthest from the center where most in a party reside, so it’s annoying when the other party labels its rival as being wholly made up of those on the outskirts—everyone on the left isn’t a member of Antifa, nor is everyone on the right a white supremacist/fascist. This is one reason the number of those claiming independent status has grown so much over the past decade or so. Gallup’s last survey, taken Jan. 2-15, showed Republicans and Democrats (both at 27 percent) dwarfed by the 45 percent of respondents who identified themselves as independent. The last time I could find that Gallup recorded more of a major party than independents was Dec. 19-22, 2012, when 38 percent of respondents identified as Democrats, 35 percent as independent, and 25 percent as Republican. 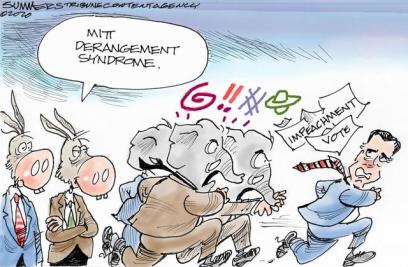 The rigid ideological stance that demands the shaming of those who deviate from the norm … well, it just looks silly to the unaffiliated and anyone else who realizes most issues are not either/or. You can be both pro-choice and not personally in favor of abortion (gasp!), or be pro-Second Amendment (all of it, as written) and against the public having access to weapons that have no place in the hands of civilians. I know, right??

Does everyone claiming Republican affiliation agree with the president? Considering the numbers of disaffected voters writing letters, tweeting and otherwise making their displeasure known, I’d say not. Do all those claiming Democratic affiliation think that AOC and Bernie Sanders’ socialism are the future of the party? Not really, and technically, democratic socialism is what those two profess, which differs from pure socialism. Just as not every Republican agrees with the president, not all Democrats agree with AOC and Bernie, and those disagreements have stoked division within the parties.

Because division solves everything. Yepper. And when the party becomes more about a single person than a set of principles, well …

Those who can no longer abide that division and, often, the compromising of their principles, end up leaving their parties. “Moderates and the traditional conservatives are politically homeless right now,” Jack Pitney, a government professor at Claremont McKenna College and a former GOP official who left the party because of Trump, told Alan Greenblatt for a March 2019 Governing article.

That would seem to provide an opening for a candidate that isn’t the current president. Emphasis on seem.

Greenblatt wrote: “There appears to be ample room left for candidates to appeal to centrist voters. But it’s not clear what centrists want. It’s generally been the case that voters who think of themselves as moderate actually hold quite liberal views on some issues and more conservative views on others. They aren’t looking for politicians who find some sweet spot in the middle of important questions.

“‘They’re all disaffected for very different reasons,’ says Kevin Kruse, a historian at Princeton University. ‘The hard part about crafting a new party would be to cobble together a coalition out of all these disparate issues.’”

Aiming to sway former party animals may not pay off politically since they might still vote by party line. Pew Research Center found only 6 percent of Americans could be considered true independents, and Gallup found that 88 percent lean toward one of the major parties. So while they call themselves independent, maybe they’re just trying to get away from the name of the party? Or maybe the cult of personality?

Yeah, I don’t know either.

To some, though, the ones who matter are those in swing states who are attracted to the lowest common denominator. Sigh.
Editorial cartoon by Nick Anderson, Houston Chronicle.

What do politicians do with that? Apparently, keep hammering away on what divides us and move further to the fringes (because compromise and rationality are for dopes). On the GOP side, many moderates have retired or lost their seats, leaving the more strident to fill the vacuum. Democrats, meanwhile, are trying to figure out how not to be considered socialists when one of their leading presidential candidates and some congressional freshmen avow those beliefs. If you have ideas, please let them know, cuz they’re floundering right now.

Ever wonder why I get so frustrated with politics? Wonder no more. Sheesh.

I’ve found over the years that it’s very difficult to change anyone’s mind on politics or religion. I’ll never convince some people that I’m not a radical socialist, a Satan worshipper or undercover Tea Partier (yep, been accused of all three, and don’t resemble any of them). My appeals to look at facts will continue to fall on deaf ears as hyperpartisans create their own “facts” and “reality” (scare quotes fully necessary).

Still, I’ll persist. I’ll keep advocating for the use of attribution in statements that might not necessarily be fact, and the shunning of party talking points and playground-style debate. I may slip at times, but I’m human.

Not a party animal.

Of course, if there were a party for cats …

Yeah, I’d be all over that.

This is my kind of party!
Cartoon by Jim Benton.