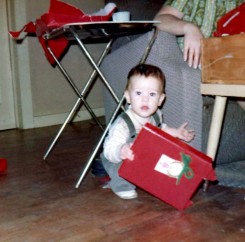 I get presents? Woo hoo!

Little did I know when I asked for Christmas stories just how many would come in. In addition to a few more printed today on the Voices page, I thought I’d share some from a few readers who were a little too early, and memories of my own as well.

(And by the way, if you have New Year’s memories or resolutions, send ’em on! I can always use letters. Just hit the usual places: voices@arkansasonline.com or through our form.)

Jake Tidmore of Little Rock shared a tradition very familiar from my childhood:

Something as simple as this can brighten the day of a neighbor.
Image found on Gardens of the Blue Ridge.

“In the middle of December each year, my German wife and I head to our backyard. There we collect small branches of loblolly pine, some with pine cones still attached, snippets of red cedar foliage (hopefully with tiny blue berries), cuttings from a front yard ornamental holly tree, each with thick clusters of red berries on the tip, a bit of English ivy, and the leftover trimmings from our Christmas tree, a Frasier fir.

“My wife enjoys the scents and greenery as she selects the various pieces, snips and trims them a bit more, and carefully arranges them in small baskets she purchased at bazaars and thrift stores earlier in the year. For a final seasonal touch, she adds a bow or a candle, sometimes a large peppermint candy cane. They add holiday color and aroma to our home until we take them to our neighbors.

Simple and tasty gift basket, though I’d probably go with Stephen’s cocoas (the amaretto is delicious) rather than Nestle.
Image found on Pinterest.

“In return, as they’ve done in years past, our neighbors bring over special gifts and treats. There is mouthwatering chocolate and pecan covered toffee, sweet snickerdoodles, plates piled with tasty homemade cookies, beef jerky or bacon, and more. The children give us homemade Christmas cards, paper snowflakes they cut out, and in the company of their young parents, they come over to admire our tree and run the electric toy train around its base.

“In no time at all, these homes on our street have an extra bit of Christmas to add to the warmth inside—something made by each of us to be shared with all of us. It brings us closer together. 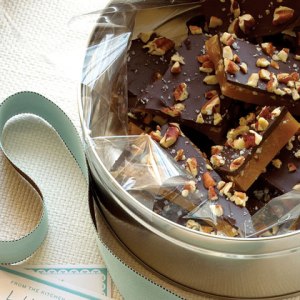 Pecan toffee … drooooool. Before I became owned by the furry one, I used to make candy and cookies for gifts all the time. Now I’m afraid too much would be covered in hair. 😉
Image found on MyRecipes.

“The toffee maker knew I was quite sincere a few weeks back when I wished her a speedy recovery from shoulder surgery. The absence of her candy would have been significant, indeed.”

Back home in Dayton, both through my church and 4-H, I and many others often delivered care packages to the elderly and shut-ins, especially at Christmastime. It always was welcomed gratefully, and made us all feel closer. It’s something I haven’t done in a while (mainly due to my health), but something I heartily endorse. (And chocolate and pecan toffee? I’d miss her too!)

“Christmas has always been special to me, because it brings back memories that have not dimmed over the years. At Christmas, my brothers and I were used to receiving gifts that were not extravagant. Our family could be described as a working-class family where a family’s worth was measured in love, not money.

“My mother and father kept one rule in the managing of their finances and that was, if we couldn’t afford it, we didn’t buy it. Everything was a cash transaction, including the house payment. Around Christmas, layaway was a much-used method to buy Christmas gifts. 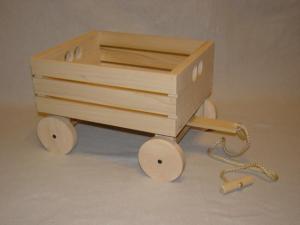 I imagine George’s wagon looked a bit like this; simple, but made with love.
Image found on My Unique Wooden Toys.

“I remember one Christmas in particular. I had wanted a wagon to pull around what few toys I had, so I asked ‘Santa’ for the wagon. My father, at the time, worked at a wood products company and he made me a wagon, constructed completely out of wood, including the wheels. When I received the wagon on Christmas Eve, I was overjoyed, not only because it was what I wanted, but because no one else had such a wagon.

“Over the next year, I wore the wagon out. Its wooden wheels gradually wearing down on the sidewalks of our neighborhood. The next Christmas I received a metal wagon with rubber tires, which became my new pride and joy. 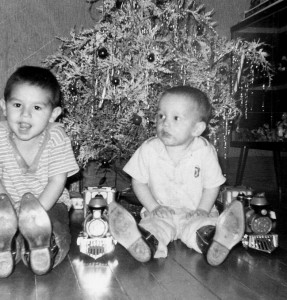 When you’re not rich in money, you have to be rich in love … and humor about those big boots.

“Each Christmas, I remember that happiness and look at today’s youngsters who have to have expensive gadgets to satisfy themselves, albeit briefly, and wonder if they are indeed as happy as I was.”

Some of my most memorable gifts have been handmade, whether just a simple card or a chocolate treat (or soup, as one reader brought me last week). While one of my grandmas tended to give thoughtful store-bought gifts, my mom’s mom usually made gifts (though we rarely did a big gift exchange at her house on Christmas since it was family, not gifts, that was important). 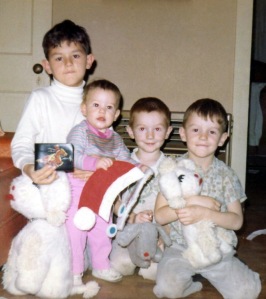 Why, there’s Droolly McGee with her brothers … and look! Handmade presents!

She made us all sorts of stuffed animals (no, not taxidermied), sock monkeys, puppets, and for my first Christmas, a Santa mobile. Nanny was a prolific crocheter, too—very few people in Dayton don’t have one of her potholders or other crocheted items. Grandpa would sometimes make wooden toys or other doodads for us and others.

While gadgets and other presents are nice, it was those simple gifts that always made me happiest because they were made with love.

“I grew up in the small town of Westford, Mass. Our daily paper was the Boston Globe, which collected donations every Christmas for poor families they would write about during the holiday season. On a kitchen counter my mother kept a clear plastic bank where we collected change throughout the year, and early in December we would unlock the bank to count and roll the coins. My mother would then write a check for that amount (plus a little more) and send it into Globe Santa. 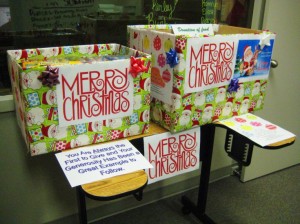 Whether it’s time, money, food, clothes, toys or other things, someone will appreciate what you have to give.
Image found on Flower Shop Network.

“This was one of my favorite holiday traditions, and one that I encourage all families to consider as you get ready to ring in the New Year, to help whichever charity is important to you. Not only was there the interest in seeing our change accumulate throughout the year, and the anticipation of finally knowing how much we’d collected, there was also the daily reminder of the many people around us who were in need. I also remember how nice it felt knowing that my spare change was helping someone else. I live alone now and no longer keep a Santa bank, but I still give to others—not just at Christmas, but throughout the year—and I thank Globe Santa for the gift of generosity and empathy their program gave to me.”

This is one that my mom instilled in us as well. For example, she basically adopted an elderly man who lived near our school (he had been a neighbor years before I was born). I remember often going with her to take him grocery shopping, out to lunch, and the one time I always remember, suit shopping. We didn’t have much, but many times, all Jess wanted was somebody to talk to and laugh with. What Mom taught me was that it doesn’t matter how much money you have—it’s how much you care about your fellow man. 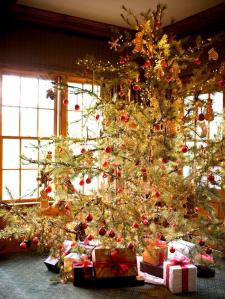 Sorta like the trees we’d have. A lot of red cedars grew around the fence line and in the backyard of the community building, and sometimes one of them would end up as the Christmas tree.
Image found on Pinterest.

At this time of year, I also always remember the down-home celebrations held at the Dayton Community Building. Usually the weekend before Christmas, we in the 4-H Club would put on our Christmas program, most of the time to a packed house. We had a huge tree in the corner with gifts not only for club members (we drew names), but people in the community also would sometimes put gifts under there for family and friends. Of course, Santa always came to bring candy, apples and oranges to the kids.

Our New Year’s party was simpler and more low-key, but just as fun. The elderly, kids, and parents in the community would tell stories, eat and play games (how many cake/pie walks did we have???) till midnight and toast the new year with punch (non-alcoholic, of course). What mattered was that we were together.

What I wouldn’t give for something that simple now.

Carrie Fisher knew what it was like to be owned by an animal. Here she is with her dearly loved service dog, Gary. RIP, Carrie.
Image found on WeRateDogs Twitter.

Tuesday we lost a brave soul. Carrie Fisher had her troubles (most notably addiction), but she helped many by being honest about mental illness. Because of her and others like her, I know I don’t have to be ashamed of being clinically depressed. Carrie was a daughter, mother, sister, actress, author and screenwriter, but for many of us, she was admired for her frank and funny outlook, and her willingness to be honest and open about her life.

What most marked her approach to obstacles and life in general was her sense of humor. In 2011, she tweeted: “If my life wasn’t funny it would just be true, and that is unacceptable.”

But come back later and I might care then.
Image found on OnSizzle.

We should all aspire to being able to find the silver lining to a dark cloud, and be willing to do something out of the norm occasionally. As Time quoted her in a piece on her wit and fearlessness: “If someone offers to turn you into a Pez dispenser, do it!” she urged. “Because it’s just made my life better.”