Maybe this is why he spends so much time playing golf …
Editorial cartoon by David Horsey, Los Angeles Times.

The president always likes to say he wants to make America great again, but I think he has the wrong approach.

No, not because I disagree with his politics, which are subject to change on a whim (I do, but that’s beside the point). It’s more because he sets groups of Americans against each other (and the world), as winners and losers … with the worst set of sore winners ever seen. What about simply being American? Why have we forgotten we’re all in this together?

I’ll be the first to admit that I was privileged as a child to have some great examples of public servants—mayors, board members, state senators and representatives and others who were willing to consider the viewpoints of others and compromise where they could, and truly work for their constituents.

Two men I greatly respect, both now sadly gone. Dale Bumpers, a Democrat, and John Paul Hammerschmidt, a Republican, weren’t afraid to compromise for the best outcome for the most people.
Image found on Pryor Center.

Perhaps no public servants in my lifetime exemplified that spirit more than U.S. Rep. John Paul Hammerschmidt and U.S. Sen. (and former governor) Dale Bumpers. Both were true gentlemen who knew they represented all their constituents, not just the ones in their parties. Neither was afraid to work across the aisle because they realized that the best solution for the most people would come through bipartisan discussion rather than endless repetition of talking points or the pointless pursuit of solutions to problems that don’t exist. Maybe our senators and representatives were just better then and less focused on what’s best for the party … and maybe the devil horns and pitchforks didn’t show up till later.

Now we don’t have public servants anymore … just politicians who seem to focus on pleasing the fringe in their parties. Sigh.

Aren’t we tired of all the fighting yet?
Image found on Southeast Progress Report.

David Mercer and Chris Reid (a former Democratic National Committee finance director and an attorney who formerly served at the Heritage Foundation, respectively) wrote in an op-ed in The Hill in September: “Inaction and apathy breed partisanship. When we as voters remain muted, we cede the playing field to the most partisan in America and leave our representatives accountable only to those with the strongest ideological bent.”

That’s not healthy. The bulk of us out here in the center, regardless of whether we lean to the left or right, would like to remind our representatives that working together isn’t a bad thing and can actually do a lot of good (1986 tax reform and 1996 welfare reform and the balanced budgets that followed, for example). Working against each other, though, often ends badly.

If something is a good idea when one party brings it up, why is it suddenly bad when another takes up the cause (ahem, health care)? Why must we constantly misrepresent parties’ stances on various topics?

No, Democrats are not pro-open borders; they have long been advocates of border security, which includes barriers, agents, and technology. No, New York’s abortion law doesn’t allow abortions on demand up to the moment of birth (it allows abortions after 24 weeks based on the doctor’s professional judgment that the baby isn’t viable or the mother’s life or health is threatened, not for just any old reason). And no, Donald Trump did not say in 1998 that if he were to run for president it would be as a Republican because “they’re the dumbest group of voters in the country.”

Yet people believe these things because their parties tell them they’re true and it makes them feel better to believe that every single person on the other side is evil and beyond redemption. If you think people don’t really believe that, I invite you to take a gander at the president’s Twitter page responses. If you don’t feel the need to bathe and/or call the police to report possible terror attacks, you may be part of the problem. 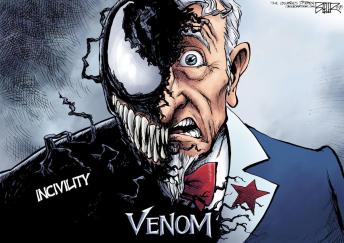 Civility is becoming a thing of the past, and anything you don’t like (like perhaps someone’s arrest) isn’t civil … sigh.
Editorial cartoon by Nate Beeler, Columbus Dispatch.

Perry Bacon Jr. wrote on FiveThirtyEight last June: “This partisan divide is such a big part of people’s political identities, in fact, that it’s reinforced simply by ‘negative partisanship,’ or loyalty to a party because you don’t like the other party. A Pew Research Center poll from last year found that about 40 percent of both Democrats and Republicans belong to their party because they oppose the other party’s values, rather than because they are particularly aligned with their own party.”

They’re so focused on who they think makes up the other party that they don’t even know who’s in their own party. Painting someone as a supporter of one party or another based on ethnicity, gender, sexual orientation, etc.—or as a supporter of everything a party stands for—can also be a minefield. But forget all that and the identity politics that goes with it (and don’t be fooled; it’s all identity politics). Let’s get back to talking to each other instead of at each other, and let’s try to listen with an open mind.

Or is that too much to ask?

Mercer and Reid ended their Hill op-ed with a plea for bipartisanship and a reminder of the words of President John F. Kennedy: “Let us not seek the Republican answer or the Democratic answer, but the right answer.”

Don’t forget the rest of the quote, either. Wise words.
Image found on AZ Quotes.

I have no idea who that anyone is yet, but that’s who has my vote.
Image found on Shirt Woot!

I asked a couple of weeks ago that we try talking to people with whom we disagree rather than going straight for derogatory names. Sadly, that didn’t happen, and the first commenter on the newspaper’s website who vowed to do that lasted about seven minutes before insulting Mitch McConnell on another thread (yep, it’s still an insult if he’s from your side of the aisle).

Try going a day without spreading false stories or insults. At least attempt to listen to others without belittling them or letting partisan leanings butt in. Discuss issues using reliable sources that bridge the political spectrum. Cool it on the whataboutism (well, we’ll be civil once the demonrats/rethuglicans start … they do a lot worse than we do!). Tamp down that inner reactionary telling you to be offended by the slightest thing—that guy could use a nap or a snack anyway. Or a binky and some hamberders.

And keep him away from social media. We have enough of that blather already.