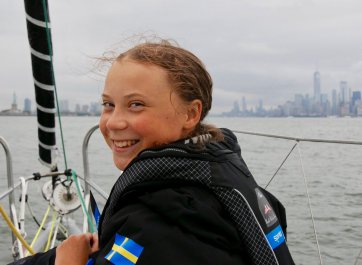 We should all be as mature and thoughtful as Greta.
Image found on Greta Thunberg’s Twitter page.

Over the past week, we got to see an image of true strength in the body of a 16-year-old girl from Stockholm. Not only is Greta Thunberg a fierce advocate for saving the planet, she is also far more mature about criticism than many people we could name. After one of those individuals (you might call him Individual 1) mocked her on Twitter, she changed her Twitter bio to what he had tweeted out. (If it were anyone else, it probably would have been perceived as sincere). 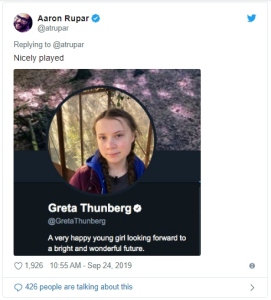 It’s been changed back now, but you have to admire how she can turn things around.
Image found on BuzzFeed.

Some adults—if you can call them that—have mocked and belittled her because they believe a teenager couldn’t possibly know what she’s talking about. Fox News had to apologize after one of its guests called her mentally ill (she’s been open about her Asperger’s). I’ve heard more than a few supposedly wiser older people sputtering with anger over her and eager to point out anything she does that they perceive as counter to her environmental message (apparently thinking that if she’s really sincere she should live in a cave).

How has she responded? With grace and humor (she even tweeted out a satirical helpline ad by an Australian comedian).

We could all learn a lot from how she handles herself.