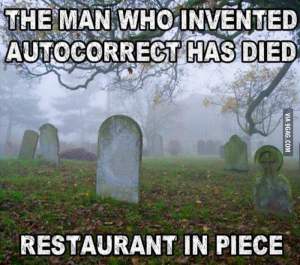 I fully believe my phone would do this.
Image found on 9Gag.

Any time I write about word-nerdiness, my fellow word nerds tend to join in with great abandon on my blog. After last week’s column on malapropisms, Earl Babbie, one of my favorite people and the writer of my college sociology textbook (plus he’s one heck of a funny guy), commented: [D]on’t we need a new word (aka neologism) for malaprops caused by spellcheck? Which reminds me of the old cartoon I’ll paraphrase: ‘The inventor of spellcheck has dived and the funnel will be held on Tuesday. Send no flours.’”

After some discussion, we landed on “checkaprop,” which sort of sounds like a tasty breakfast cereal. I’d add “ism” to the end (checkapropism), just like malapropism.

To add to the point, Earl emailed a Facebook comment from a friend talking about his granddaughter: “[S]he will do awesome! Evil is a great young lady!”

I feel your pain, Evie, as spellcheck always wants to change my last name to Loopier. In my case it’s accurate, though I’m sure it is not in yours. I doubt your granddad has any evil grandchildren … unless they’re the fun, goofy kind of evil. 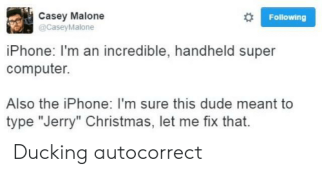 But please, don’t turn off autocorrect. Not just because I need the laugh, but because people might start thinking you’re the president, especially if you start throwing in random capitalization and the occasional “FAKE NEWS!!!”
Image found on me.me.

Users of iPhones know all too well the pain of hyper spellcheck/autocorrect. My phone’s an Android (named Cranky McGee), but it’s not afraid to try to one-up iPhones in autocorrect ridiculousness. Recently, while I was texting a very goofy friend (like I’d have any other kind), it changed “armed insurrection” to “armed insecurity.” Luckily I caught it, but we had a good laugh about it.

Earl, by the way, would call that a canceled checkaprop. (Thank you, everyone! He’s here all week! Try the veal and tip your waitress!)

While I was battling a sinus infection/summer cold that was turning into bronchitis, I texted that goofy friend that my throat felt as if it had been “buffed vigorously with a sander.” Just before I sent it, I saw that autocorrect changed it to “sandwich.”

If the bread was toasted, sure, it might have the same effect, but toast is going to disintegrate, people! 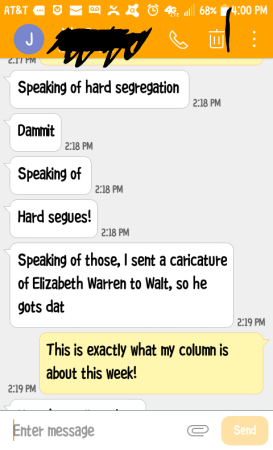 We went from the customs system backlog to dystopia to Curious George to line art of Elizabeth Warren for the opinion section. And no, I swear that font is not Comic Sans.

I don’t always notice before I hit send, but I’ve managed so far to not let anything truly horrifying get through. That’s one of the reasons it takes me so long to text. Tuesday afternoon while texting with that same friend (yes, we do this a lot), he let one get through that illustrated the point quite nicely—his iPhone changed segue to segregation; had he had a different audience, offense might have been taken.

When I sent an email to one of our columnists from my iPad, Siri (devilish vixen that she is) changed “yeesh” (is so a word!) to “eyeshadow.” I … just don’t know anymore. But at least she knows the difference between it’s and its, so …

And if one more person sends me something with its’—which isn’t a word—in it … I might just have to have his guts for garters. Then I’ll have to find someone who wears garters so they won’t go to waste. It’s a whole thing and I’m tired, so don’t make me do it. 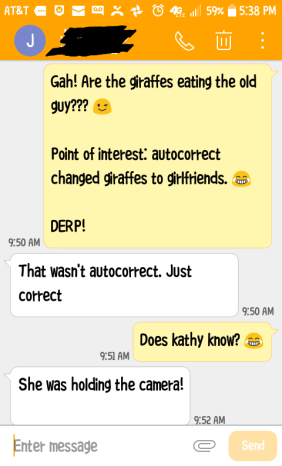 My friend had sent me a picture of him being nuzzled by two giraffes. Some of our conversations are weirder than this one.

There are more people than just me who have phones and iPads with minds of their own changing “giraffes” to “girlfriends.” (I’m starting to worry about the people who designed this stuff! It’s bad enough that my phone suggests “wiseass” when I type a W.) That’s why there are multiple websites and blog posts devoted to autocorrect errors. One, apparently now defunct, was titled with what many of us have yelled at some point at our electronics: “Damn you, autocorrect!” 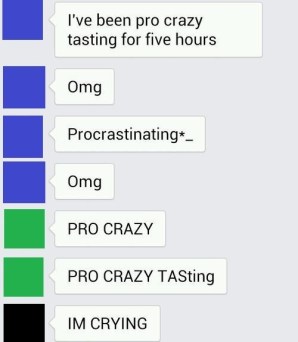 Unfortunately, a lot of the entries on those sites are unpublishable in a family newspaper (or a mostly family-friendly blog like this one). Autocorrect apparently has a really dirty mind. I always joked that a copy editor (the readers’ last line of defense) had to have a dirty mind to catch inadvertent raunchiness so the newspaper wouldn’t get deluged by calls from outraged readers … but autocorrect … whew.

Sometimes, though, the AI appears to gain a tiny censor (or a grandma to smack one upside the head) by correcting to something a bit less scurrilous, like a text I found on AutoCoWrecks (the image of which, unfortunately, I neglected to copy): “No, I just like to give the impression that I’m a heartless mustard.”

Would that be French’s? Gulden’s? Grey Poupon? 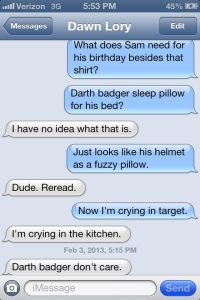 I’m not so much a Star Wars fan, but this cracked me up.
Image found on Grammarly.

Our chubby little fingers and hyper AI aren’t the only thing causing problems. I dictate handwritten letters and those typed in all caps into my iPad (plus the occasional one that’s too light or too cluttered with corrections to scan), and Siri seems to think, even when I clearly enunciate, that I’m spouting nonsense or am as loopy as my name suggests. Last week, she gave me “that right at Phillipi to Merrick insta have a choice.”

I had no idea what that was until I later started editing the letter I’d dictated. It was supposed to be: “the right of qualified Americans to have a toy.”

Of course. Why didn’t I see that?

It made me really miss when Siri misheard “monkey wrench” as “monkey ranch.” That at least made sense and was funny.

And I still would like to go to a monkey ranch. Well, as long as there are no howler monkeys or poo-flingers. Sigh … 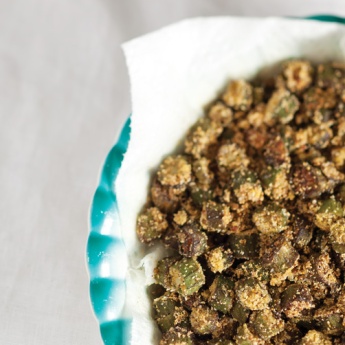 When you eat some of the less-crisp pieces with the almost-burnt pieces, it’s just Southern heaven. Cornmeal, salt, pepper and some oil are all you need.
Image found on Taste of the South Magazine.

I was reminiscing with another friend recently about foods that make us think of home. For me, it’s poke salat (cooked with bacon grease and an egg) and cornmeal-coated (not battered) okra cooked till it’s almost burnt. Daddy always got dibs on the bowl of okra, but once he was done scooping out a heaping helping, the rest of us would fight over the overdone pieces. That crunch made the fight worth it; that and catfish are pretty much the only things I ever fry anymore. Homemade ice cream (usually hand-cranked out by the lilac bush in the backyard) was also a favorite, as was snow cream in the winter.

So here’s another audience-participation request for readers. What food always takes you back to the family dinner table when you were a kid? I imagine native Southerners might choose sweet tea, chocolate pie (my grandpa’s favorite, which was really just homemade pudding in a pie shell) or collards, while Northerners might pick penuche or clam chowder (though hopefully not together). If anyone says haggis or oysters, I may throw up.

Let me know at blooper@arkansasonline.com, or through the comments under this here blog, and you may end up in a future column.

Now hand me that crispy okra, and nobody gets hurt.