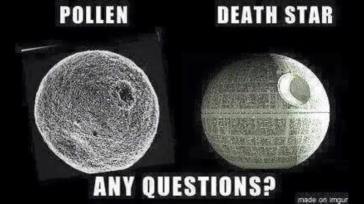 OK, I’m more of a Star Trek than Star Wars fan, but this is pretty accurate. Both these things are evil.
Image found on Pinterest.

Over the weekend, in addition to a massive amount of pollen (which I still maintain is evil), I took in yet more photo fakery. There’s apparently not enough of this stuff floating around . . . fake photos, not pollen (there’s way too much of that, which is why I’m a mouth-breather right now). I’m still rolling my eyes over the Barack Obama Black Panther photo, which showed an adult Obama at the time—the late 1960s—he would have been in elementary school. (And the photo of Donald Trump on the golf course with soiled pants? Also fake.)

This time, it was memed GIF and still images of a hollow-eyed Emma Gonzalez ripping up a copy of the Constitution.

This is fake, not that it matters to the people who’ve been spreading it.
Screenshot found on BuzzFeed.

Eagles of Death Metal singer Jesse Hughes (a survivor of the Bataclan mass shooting) even wrote on Instagram that the photo had been “photoshopped for more accuracy.” Yeah, that makes sense.

The real image by photographer Tyler Mitchell for Teen Vogue shows the Parkland survivor ripping a gun-range target in half. Among the Twitter accounts spreading the fake image was Gab, a social network popular among the far right. A few hours later, Gab clarified (sarcastically) that it was “parody/satire,” but by that time, the damage had been done as the image had been shared widely on social media. It was also shared by Adam Baldwin, whose acting I have enjoyed, but whose extreme politics I can’t respect.

The Hill reported that Phillip Picardi, chief content officer of Teen Vogue, tweeted the side-by-side comparison, then said: “The fact that we even have to clarify this is proof of how democracy continues to be fractured by people who manipulate and fabricate the truth.” 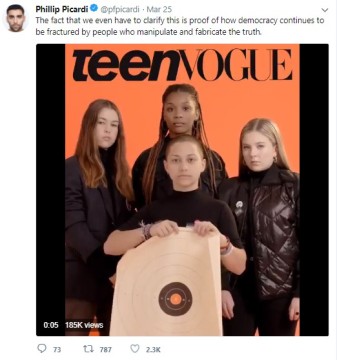 Why, look … it’s a gun-range target, not the Constitution! I’m shocked! Plus, I’ve yet to use up my quota of exclamation points!!!!!
Screenshot from Phillip Picardi’s Twitter page.

Photos are commonly manipulated, but newspapers and wire services try to keep that to a bare minimum for news photos they publish—perhaps some toning, adjusting sharpness or cropping to clean up and improve the shots.

When something more is done to news photos, such as making a composite of multiple images that changes the meaning, there are generally consequences if that is not disclosed. Some photographers, like Adnan Hajj and Brian Walski, were fired after having manipulated images of war in the Middle East. They’re far from the first to have done this; Civil War photographer Mathew Brady was one of several at the time who staged photos and inserted people into group shots. It was sort of an open secret.

Magazines—especially women’s and fashion magazines— have been dinged numerous times for photo tomfoolery such as shaving bits off cover models to make them look thinner or less ethnic, but it seems they mostly just go on as if nothing questionable was done. 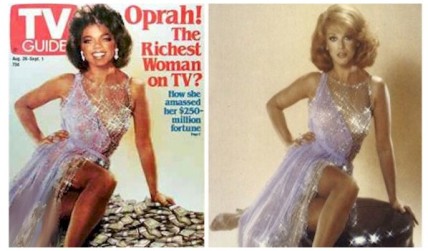 Bob Mackie knew something was off about this. TV Guide, by the way didn’t get permission from Oprah or Ann-Margret to do this.
Image found on TheaterLife.

In one case in 1989, TV Guide pasted Oprah Winfrey’s head on someone else’s body for a cover story, and was called out by the designer who had made the dress for Ann-Margret, whose body from a 1979 image was used. The composite photo is somewhat impressive, considering it had to be physically spliced since Photoshop wasn’t widely available until 1990. But it was still pretty obviously fake … Oprah’s head was just a bit too large for it to be seamless, and the skin tone was off. More recently, Vanity Fair managed to give both Oprah and Reese Witherspoon extra limbs (maybe Reese’s extra leg was actress/singer Zendaya’s missing one).

Oprah might get a complex if she weren’t so relentlessly positive. But at least the Vanity Fair photo errors were unintentional.

Of course, manipulation of photos isn’t really necessary for someone to use them as a political tool as long as they’re willing to … well, lie. You know, about context, quotes, reality …

Somehow I don’t think that’s a problem for a lot of the people who share memes. 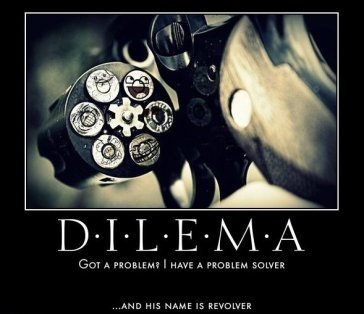 They’re not really big on correct spelling either.
Image found on FunnyJunk.

Still, everyone should be aware of tips to identify fake photos because, Lord knows, if you spend any time on the Internet, you’re going to find a lot of them.

One thing to look for is where light and shadow fall. If light is on someone’s right side, for instance, shadows should be on the left side. If light-source properties (like, say, the direction of the camera flash or other light source) in reflections in one person’s eyes are inconsistent in a photo with multiple people, manipulation of the image is possible.

By tracking shadows and their light source, it’s possible to tell if something’s been added to a photo.
Photo by Hany Farid found on BBC.

You can also track reflections in the photo, said Hany Farid, a Dartmouth professor and expert in digital forensics and image analysis, in a BBC interview. Draw lines from whatever creates the reflection to the reflective surface; if the lines don’t converge at a single point behind the surface, he said, the photo is likely doctored. The same principle works with shadows and their light source. The publication source in most cases (for example, Wall Street Journal) is a good indicator of authenticity as well.

Farid also recommended checking the ears. In a sunny photo, the ears (of someone without hair obstructing the ears) will appear reddish from the front if the sun (or other bright light source) is behind the subject, and opaque if it’s in front of them; if the sun is behind the person but the ears are opaque, well … that means someone probably either photoshopped the ears or the person. 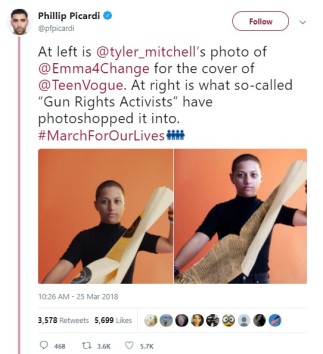 Also, skin tone can provide a clue; in the doctored image mentioned earlier, Emma Gonzalez’s skin was lightened except for the skin around her eyes … you know, so she’d look more evil … and apparently exceptionally sleep-deprived. It appears her nose and the shape of her head might have also been manipulated a little; I’m surprised they didn’t add horns. When compared to an unedited photo of her, you can see the difference.

But don’t be surprised if fakes still slip past you (test your mettle with Adobe’s quiz here … I got 14 out of 25 correct … sheesh). Farid told the BBC: “More often than not, people think that the real images are fake and that things that are fake are real. And their confidence is very high. So people are both ignorant and confident, which is the worst combination.”

Just as with fake news, you should be skeptical. As Ronald Reagan said, “Trust but verify.”

Come to think of it, I say that an awful lot too. Do it anyway, though.