I looked worse than this … apparently I looked like death when I left the office Thursday. I spent Friday covered in blankets in a warm room. Fun.
Image found on Paste Magazine.

Do you know how it feels to get the flu again just after you thought you were over it? I do, and it wasn’t fun.

Having had to spend yet more time feeling awful, looking awful and spending an awful lot of time in a room I’d rather not be in for long, I’m more than ready to get back at it and answer a few questions about the Voices page. And I’ve been saving some snark just for you (no, not you—YOU … you know who you are).

I’ve sent letter after letter in, and you just won’t print them!!! Are you biased against me?

More than likely I’m not biased against you unless your method of getting letters in is to bully/annoy the holy hell out of people. My goal is to fill the space available, and I don’t care where on (or off) the political spectrum a letter is. If you haven’t been printed, ask yourself some questions.

😈 Did I call someone a criminal who hasn’t been convicted of a crime, or did I otherwise commit libel? If so, not happening.

And these are some of the less objectionable things he’s said …
Editorial cartoon by Nick Anderson, Houston Chronicle.

🤥 Were my statements of fact accurate? Much of the time errors found in fact-checking are fatal because the letter is predicated on a falsehood (quite often partisan talking points). Small errors I can fix, but when everything hangs on one statement that has been confirmed false through consultation of original sources, or by nonpartisan fact-checkers using original sources … not gonna happen. You can sometimes get around this by attributing the statement to the source, but be aware that people will call you out on that.

As for talking points, just say no. Seriously. And when you decide to patronize someone who corrects you, at least be correct in your response. (No, don’t try to tell me that economic growth is measured daily [it’s not, as change is measured over time, generally quarterly and annually] and that you got your talking point about Barack Obama’s record of economic growth from Fox News. It means I’ll have to get some oxygen brought in after all that wheeze-laughing.)

😴 Was the letter too long, and did I include a lot of statements that have to be fact-checked? If the letter is just a little over, I can generally work with it and trim the fat, but if it’s too much over (say, 400 words or longer), it’s more problematic and will often be set aside. If there are a lot of things that have to be fact-checked, it will take longer because I’m only one person. (You can help speed that up by including your sources.)

I miss Stephanie a lot, but on days like this, I really, really miss her.
Image found on Harvard TH Chan School of Public Health.

🙄 Was the letter a repeat of one I’ve sent before, or a form letter? Then … no. Sometimes a repeat or a form letter will slip through, but not often. But I have to wonder about some letter-writers: Are they trying to drive me insane? Don’t tell me; I don’t wanna know.

☎ Did I include my daytime phone number and/or a working email address? If I can’t reach you, I probably won’t print your letter unless you’ve previously given blanket permission. Again, I’m only one person and don’t have time to track you down.

You keep saying no name-calling, but the president and other people in the government are called names on the Voices page all the time. How is that fair?

As has been explained many, many times, that “no name-calling/personal attacks” thing applies to doing so to other letter-writers. In most cases, the letters on the Voices page are written by private citizens who didn’t sign up to be pilloried, so attacks (on them, not their logic) are forbidden in order to keep people from fleeing the page as they have in the past. And yes, if you make threats toward another letter-writer, you’re just asking to be banned.

At least he didn’t call him a jive turkey.
Savage Chickens by Doug Savage.

Public figures, on the other hand, knew (or should have known) what they were signing up for when they entered the public realm. Politicians for centuries have been called names and have done plenty of name-calling themselves; I’m sure there hasn’t been a president yet who wasn’t called names in letters to the editor (Lord, if you saw what Bill Clinton, George W. Bush and Barack Obama were called just in my newspaper). They and other public figures are fair game as long as the names aren’t libelous or unsuitable for a family newspaper.

Are you always so weird?

What is the rule for making abbreviations plural?

Yea! One for the word nerd! This particular question included a clipping of a recent article with the headline, “16 AGs file a brief on 4 abortion laws/Aim is blocking 2017 Arkansas edicts.”

In the story, attorneys general, the correct plural of “attorney general,” is used, but in the headline, it’s “AGs,” which one might read as attorney generals … and that’s the wrong plural form. However, abbreviations such as AG are most commonly made plural with the addition of an “s” (but not “’s,” which is what the New York Times stylebook recommends … crazy New Yorkers). “AsG” might make readers’ heads explode as they try to decipher it, and we don’t want that. So sure, “AGs” might be technically incorrect, but it is most likely to be understood.

Chicken alphabet soup … yum! No celery for me, please.
Image found on MyRecipes.

And by the way, headlines are generally the only place you’ll see abbreviations and acronyms regularly. In the text of stories, using too many has the tendency of making reading difficult as readers wade through alphabet soup.

For this, no snark. A reader called in Monday to ask me to remind people to clean out their martin houses if they haven’t already, because the birds are beginning to return to Arkansas. Purple martins tend to return to the same house year after year. A protected species, martins rely almost entirely on man-made houses. Birdwatching.com suggests, for those wanting to attract new martins, that you wait until four to six weeks after the first ones arrive. Young males in their first nesting season usually don’t arrive until more than a month after the adults, and they’ll be looking for a place to nest. 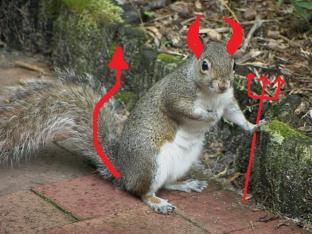 If I didn’t know better, I’d swear this was one of the squirrels digging up my planters. Eeeee-vil!
Image found on It’s Just A Pie.

I’m not a birder, but any creature that eats flies, mosquitoes, wasps and other flying menaces is OK by me. And if they want to take a stab at the squirrels in my yard, have at it. But please, leave the butterflies and dragonflies alone, birds. Those aren’t menaces, no matter how tasty you might think they are.

Focus on the squirrels. I’m begging you.

On another topic entirely, it appears someone resembling a rancid Cheeto is spiraling, all the while claiming there’s no chaos around him (and created by him). This cartoon pretty much sums up the whole mess as far as I’m concerned.

If there were chocolate at the very least, it might not be so painful.
Editorial cartoon by Drew Sheneman, Tribune Content Agency.