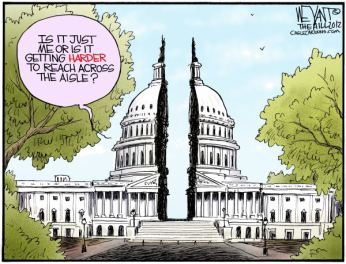 Compromise is verboten!
Editorial cartoon by Christopher Weyant, The Hill.

It’s hard sometimes to understand just what is going on in the world. For years, we’ve watched as divisions have deepened across the U.S. Depending who you talk to, it all started with Barack Obama, or the Southern strategy, or Voldemort.

Wait, scratch that last one.

Whatever the origin, we have become our own worst enemy. And worse, some of us are reveling in this new, more assertive tribalism.

Last week when Guardian reporter Ben Jacobs was body-slammed in Montana by a candidate after asking a question about the Republican health-care plan, many of the reactions were sharply divided along partisan lines.

This is how I see most political “battles” these days.
GIF found on Pinterest.

People were deciding who was to be believed not on the evidence but on whether the person was a Democrat or Republican, and constructing narratives about Jacobs’ past, facts be damned (I saw one who claimed Jacobs had worked for Obama … which he didn’t) in order to undermine his veracity. Eyewitnesses from a Fox news station and an audio recording of the incident made no difference to those who had made up their minds. It didn’t help that the candidate, Greg Gianforte, who was charged with assault, released a statement calling Jacobs a “liberal journalist” and disputing what happened … because it was obviously Jacobs’ fault …  he’s just so punchable! Others have said Jacobs had it coming (apparently just because he’s a reporter … and Jewish).

Acuna ended up being skewered by outlets to the right of Fox. Yeesh.
Screenshot of Alicia Acuna response to Trump tweet.

At his victory speech, Gianforte admitted what he’d done and apologized, but his supporters laughed when he mentioned what happened. And when he said he’d made a mistake, reported the Washington Post’s David Weigel, one supporter yelled, “Not in our minds!”

But no, he’s not to blame, not even an itty-bitty bit!
Editorial cartoon by Adam Zyglis, Buffalo News.

Michelle Fields, the former Breitbart reporter grabbed by Corey Lewandowski at a Donald Trump rally last year when she tried to ask Trump a question, stood up for Jacobs in an op-ed in the New York Times:

“From the age of the Gipper to our era of the Groper, the state of our politics has declined drastically. It’s hard to imagine the late, great William F. Buckley cheering on a politician who assaulted a reporter. But Buckley’s nephew, Brent Bozell, did just that on Twitter in the aftermath of the Jacobs’ incident. ‘Jacobs is an obnoxious, dishonest first class jerk. I’m not surprised he got smacked,’ Mr. Bozell, who runs the conservative Media Research Institute, tweeted.

“In the United States today, it seems all politics has become entirely situational, and Republicans have put party over civility. Had Ben been attacked by a Democrat, many on the right who are refusing to believe the assault occurred—or outright praising it—would be hailing him as a victim of liberal rage. Had Hillary Clinton’s campaign manager, rather than Mr. Trump’s, grabbed my arm, I would not have been abandoned by many of my friends and mentors at Fox News, or my employer, Breitbart News. But I was inconvenient to their political narrative.”

How dare she not just take whatever abuse is dished out, as long as it’s from the party favored by the media outlet.

Shanto Iyengar and Sean Westwood found in a new study: “Hostility for the opposition party among rank-and-file partisans sends a clear signal to elected officials; representatives who appear willing to work across party lines run the risk of being perceived as ‘appeasers.’ For the vast majority who represent uncompetitive districts, there are strong incentives to ‘bash’ the opposition.” They also found that hyperpartisans’ level of animosity “implies a reduced willingness to treat the actions of partisan opponents as legitimate, resulting in more intense contestation of policy outcomes.”

I can only pay attention to that which confirms my preconceptions. And you’re a doody-head.
Image found on sfctoday.com.

Westwood said that party loyalties also can affect the news we consume and share on social media, meaning that if a Republican sees something about a scandal involving a Democrat (and vice versa), they’re more likely to share it. He told the New York Times: “You want to show that you’re a good member of your tribe. You want to show others that Republicans are bad or Democrats are bad, and your tribe is good. Social media provides a unique opportunity to publicly declare to the world what your beliefs are and how willing you are to denigrate the opposition and reinforce your own political candidates.”

’Cause, ya know, all that matters is maintaining the party line and brooking no compromise. Compromise is a dirty word.

Luntz perhaps should move away from the whole Republican thing since it seems he doesn’t fit with the party’s current ethos.
Screenshot from Frank Luntz’s Twitter page.

While the news side of Fox News did its best to cover the Montana assault fairly, some contributors clearly toed the party line, saying that Jacobs got some “Montana justice.” In response Republican pollster Frank Luntz had perhaps the most cogent perspective on this whole situation, in a tweet on Thursday: “If you check the party affiliation of someone who commits assaults before deciding how you feel about it, you’re what’s wrong with America.”

Regardless of party, instances like what happened in Montana last week should be condemned. Any reporter who is simply doing his or her job shouldn’t be attacked, physically or verbally, because freedom of the press is of vital importance to a free society.

Ideas from the other party deserve just as much consideration as those from your own, and sometimes the best ideas come from working together … you know, instead of just reflexively dismissing something because of party affiliation.

Besides, staring at everything through a hyperpartisan lens will just result in more of the same incivility. Sure, it’s entertaining at family reunions, but your family can ignore you a lot more easily.

We have a little catching up to do since Twitter Burns took last week off.

And our president has been a wee bit active over the last couple of weeks. You would think that a foreign trip would slow him down.

Wait … what am I saying? The man wouldn’t even let a Balkan prime minister slow him down. Good thing he wasn’t in that golf cart at the time.

But they’re being mean to me!!!
Screenshot from John Lurie’s Twitter page. 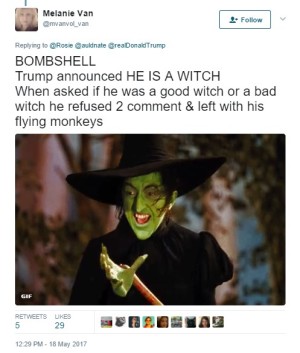 Arthur Miller, sure … but the current president seems to call more for Samuel Beckett.
Screenshot of Steve Butts’ Twitter page. 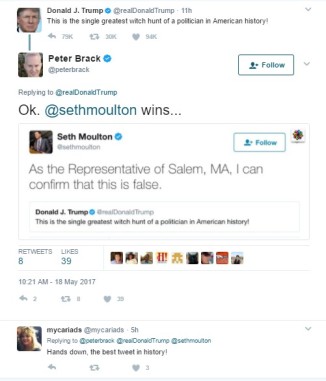 No, his hands are the biggest!
Screenshot from Tommy Campbell’s Twitter page.

Or “Morons Are Governing America.” Either or.
Screenshot from Samir Madani’s Twitter page.

I know … you’d think there would be warnings …
Screenshot from Brian Heater’s Twitter page.

Somebody really should tell them …
Screenshot from Rent Teznor’s Twitter page.

3 thoughts on “An uncivil war”