Guys, it’s not funny anymore. Get back to work!

I expect to see a lot of kinds of letters in my job, full of gripes from all walks of life.

What I don’t expect? That would be a letter talking about my column of “sound, reasoned discourse.”

I had promised myself that I wouldn’t tackle anything political in any columns I wrote for the paper (you remember why: foaming at the mouth is just not attractive on anyone), but because of the number of letters we’d been getting putting forth the same tired nonsense that has been debunked by everybody and their brother’s Yorkie, I found it necessary to discuss the three most common misconceptions in letters about Obamacare.

Yep,  I did get letters that basically said I’m an idiot, too, but that one calling me sound and reasoned just shocked the crap out of me. Another one took issue with a couple of things I’d said in the column (after complimenting me and Steph … thanks!), but did something I was starting to think I might not see, especially on the topic of the shutdown: He used actual facts behind his argument. I still don’t quite agree with him, but the fact that he employed … uh, what is it … oh, yeah … “sound, reasoned discourse” gives me hope.

That’s something that’s been sadly lacking in the shutdown drama (and quite a bit of the coverage of it … yeesh). Far too many people choose instead to utilize selective hearing, tuning out after they hear an offensive word … like, perhaps “Democrats,” “Koch brothers,” or “compromise.” Whatever doesn’t fit with their preconceived notion of what happened becomes nothing but lies as far as they’re concerned. Even hard evidence is trumped by what so-and-so said about it. Everything is fed through the filter of partisan politics so that inconvenient truths can be more easily ignored. Cuz, ya know … Rush is right, facts be damned.

That’s why people like Tom Cotton apparently feel no compunction about continuing to run a campaign ad that’s been thoroughly debunked. Facts are just insignificant details to be ignored. As, apparently, are constituents, as Cotton missed two votes (true, they were insignificant ones, but they were as the shutdown threatened) for a fundraiser in Houston … and not the one in Arkansas. The bulk of his funds in his last campaign came from out-of-state, and it appears he’s planning on following the same path again. And sadly, people still follow him, something that really confuses me.

I worried about writing the first column because I wasn’t sure that it would be welcomed by anybody who read the page. I worried about the second one because I did venture into politics, somewhere I intended not to tread. I’m still going to worry regardless because that’s just me (if you only knew how long it takes me to post a finished blog entry). But at least someone thinks I know what I’m talking about … at least a little bit.

For those who might wonder about the status of Cathy Frye and Rick McFarland after their wilderness escapade, here’s a link to Cathy’s blog post upon her return. Her sense of humor is still intact, and thank God, especially considering that she was naked when rescuers found her (a point that much of the media seemed more than a little obsessed with, to her amusement). Rick returned to work today, and Cathy will be back in the office tomorrow. I’d hug her when I see her, but I don’t think she needs my remaining cold germs on top of everything else. You’re welcome. 😀

All of this more than merits some fuzzy-belly or duck-butt therapy. which is why this, from Cute Overload yesterday, really cracked me up. If this doesn’t work, try this. (If you don’t laugh or say “aaaaaw” you have no soul.) 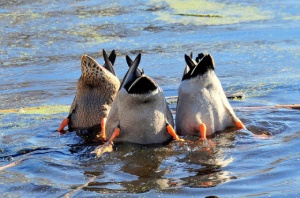