You know how cockroaches and Twinkies (though now not the Twinkies) are supposed to be the only things that would survive nuclear armageddon? Add one more thing to that: extremist lawmakers. I’m calling them nuclear cockroaches. 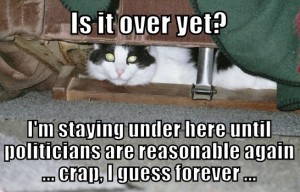 Today I had to ask our cartoonist (John Deering, who is awesome, has a couple of comic strips and is a fellow Capricorn … and is just in the next office) to come up with a caricature of Tom Cotton since he’s apparently not going away (though he’s really his own caricature … honestly, he’s an editorial cartoonist’s dream, all ears and Adam’s apple).

The best thing I can say about Cotton is that his name allows me to unleash some horrible puns in headlines (tomorrow’s John Brummett column is no exception).

I’ve always been of the mind that it matters not what party a lawmaker is from as long as said lawmaker does the job the people elected him or her to do, not what lobbyists and party leaders decide is best for them. There are few actual public servants anymore, and that’s just sad … and in the case of Tom Cotton and his ilk, terrifying.

Arkansas has had quite a few politicians whose feet resided in their mouths 99% of the time (Mike Huckabee alone was a cottage industry for pundits), but most of the time, what they said was just funny and/or offensive.

With Cotton and others like him (remember Nate Bell?), it’s terrifying.

Blaming Barack Obama (hell, anyone even slightly moderate to liberal) for everything wrong with the world; deciding that (were I Iranian) my nieces and nephews could be blamed for my wrongs; and forgetting that George W. Bush’s presidency started Jan. 20, 2001, not Sept. 12, 2001, as well as the nearly four years between 9/11 and joining the Army while giving the impression that there was no gap … yep, that’s kosher.

Even more terrifying is how well-financed so many of these guys are, and that there’s a group of supporters that so believe in people like Cotton, regardless of how insane he might sound, that they will shout down anyone who dares speak up with truth and logic.

And that is saddest of all.

This is why I do my best to find the funny in my life (and believe me, it’s laughable). Sometimes it’s really hard to do, especially on a day full of bullies and bad news.

I think it’s time to put a hat on the cat. 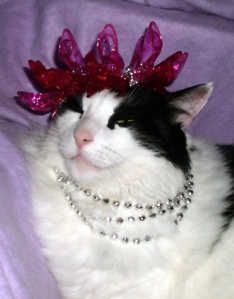 One thought on “Apres Apocalypse”